Thank You Jeebus, Thank You Lord 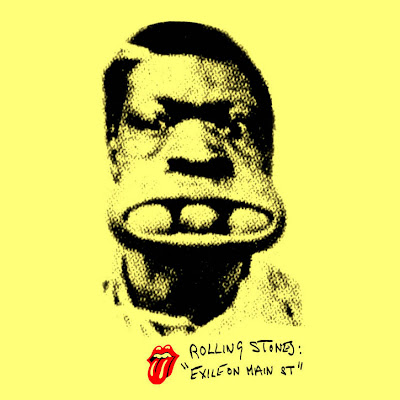 If, after listening to all 18 tracks and 67 minutes of the Rolling Stones’ Exile on Main Street, you’ve ever thought to yourself, “Boy, I could really do with a few more scuzzy, skeevy, down-and-dirty Stones tracks from those same sessions,” your ship has just come in. (And we think that’s Keith Richards dangling perilously from the crow’s nest.) Universal Music said that it would re-release Exile on Main Street, the 1972 Rolling Stones double album. The new version, which will get a United States release on May 18, will include 10 new tracks, with titles like “Plundered My Soul,” “Dancing in the Light,” “Following the River” and “Pass the Wine.” It will also feature alternate versions of songs like “Soul Survivor” and “Loving Cup.” A deluxe edition of the album will also include a DVD of a new Rolling Stones documentary, Stones in Exile.

This falls under the category of Now I Can Die Happy, basically. In fact, my feeling about Exile has always been summed up by the phrase Cameron Crowe used to describe The Beatles -- you still can't buy a better album. So you can bet I'll be devouring this deluxe version the minute it hits the stores.

I should also add that the documentary mentioned at the end of the Times item is supposed to include large sections of filmmaker Robert Franks legendary and highly litigated over the years Cocksucker Blues, a work said by those who've seen it (a group that does not include your humble scribe) to be pretty much the definitive document of the sort of rock decadence that was fashionable in the immediate exhausted wake of the 60s. I'm particularly looking forward to the topless footage of Bianca Jagger, but perhaps I've said too much.
Posted by steve simels at 12:12 AM

Hey, Steve, you can find "Cocksucker Blues" on YouTube.

I know "Exile" is supposed to be a great album - everyone says so, but to me it has always sounded like it was poorly recorded and too sloppily performed - like no one really cared about it. Maybe the looseness is part of the appeal?

I'm with MJ. There are brilliant individual tracks, and I suppose it would make a great single album. But I think Exile records the moment when the Stones stopped being the GRRBITW, when all the self-indulgences (physical, psychic, and artistic) finally caught up with them.

It makes for a more interesting listening experience that they seem so fully aware of the process as it happens. And, as I've said, there are tracks to hold up beside any they ever made. But in the previous six years they had released Aftermath, Between the Buttons, Beggar's Banquet, Let it Bleed, and Sticky Fingers, each of which deserves to called great. That's not a bad run, even taking into account the one stinker I don't mention.

Jagger himself has expressed the same criticism as MJ's.

Well, needless to say I couldn't disagree more, and perhaps I'll discuss why I disagree at greater length sometime later.

For the moment, let's just say that for me, anyway, this is the Stones finally making the blues album they've been threatening to make since forever, with the kicker being that it's THEIR blues.

I could go on, but like I said, on some future occasion when I have a little more time on my hands. Or maybe just when I actually have the expanded version...
:-)

I just have to say, that early Stones always sounded like ersatz blues to me...Exile is the only disc that sounds like the Stones finally found their own sound... This is great news!

Well, if you compare their "I Just Want to Make Love to You" with "Stop Breaking Down" you can see the growth. They've make a vocabulary for themselves in the meantime. And if they never did anything as good afterwards I suppose that knowledge shouldn't interfere with our enjoyment. To me Exile always seemed like a photograph of a race car at the moment it goes over the high side of a banked oval. Is it at its best then? Kind of.

Well, maybe the new version will have better sound, and I will finally see the light. Now, "Jamming with Edward"....

Just watched the Cocksucker Blues footage on Youtube, and if the director's intention was to induce in the viewer the profound and relentless boredom of road life, then it's a masterpiece. As to the Bianca feature I can only say that if you've seen one, you've seen 'em both.

i think it is their masterpiece. i like peter's point about the difference between the early blues covers and stop breaking down. they've made a musical vocabulary for themselves and they become a blues; it's not anymore just that they love the blues.

i think the same could be said of their rock---all down the line and happy, in particular. on their previous great albums they seemed to be trying to understand what made things great, breaking out the musical pieces, enunciating they lyrics. on exile, it just flows as a, decidely messy, but brilliant and felt piece. that may be whymick is always complaining about it---he's too analytical for his band's good sometimes.

probably the exile moment was too good to ever exactly recapture; probably as peter said the excesses caught up with them, but i think it was after exile, which nailed down for them the career title of GRRBITW, despite the repeated disappointments that followed

Peter said: But in the previous six years they had released Aftermath, Between the Buttons, Beggar's Banquet, Let it Bleed, and Sticky Fingers, each of which deserves to called great.

Most bands would be happy to produce one album as great as any of these during an entire career. And these five came out in only six years.

Re. Exile: is it sloppy, self-indulgent and decadent? Yes. But so were the Stones.

I saw Cocksucker Blues about twenty years ago at Anthology Film Archives in NYC and thought it a disappointing, frustrating mess. Afterward, a guy on the stairs was overheard to say he'd be happy "if I never see a movie using a hand-held camera ever again," and I couldn't agree more. Just when things get interesting, there's a cut to some stoned groupie or such. Exile achieved decadence w/out trying, but the movie strained for it. As for the Bianca topless moment, I found it cringe-inducing; she's clearly shocked and embarrassed, and it was cruel to include it in the final cut.

BTW Steve: You included Exile on your Ten Best list in 1978 (actually Eight Best, as two were "for the future") which is what prompted me to finally go out and buy it. Here's what I remember of the list: Chuck Berry's Golden Decade, Pet Sounds, The Beatles (white album), the Stones' debut, Exile, Blonde on Blonde...after that I'm vague. Sun Sessions? Who's Next? Born to Run? I don't remember, but I did make sure to have everything on the list. Belated thanks.

I DO remember the "two for the future" - Johnny Rotten "recorded while retching over his older sister's Beatles albums" and Yoko Ono ("noted shrike") in a farewell performance.

Some groups or performers I only want to hear their best. The greatest hits package will do nicely!

Other groups or artists, I want it all. Everything I can get. I have much more inclusive standards for the latter group than the former.

Neil Young, The Stones up through Emotional Rescue or so, The Fab obviously, Ben Folds, Alex Chilton, Ella Fitzgerald, I want ALL their stuff and will lavishly praise their sloppiest output because I love their work.

I remember that list as well: you got six of them, Born to Run was definitely one of the remaining two. The last one I have to say I'm not totally sure on, but I think it might have been Kick Out the Jams by the MC5. Hopefully, Steve would be able to confirm.

Steve's comment on Exile then, by the way, is almost verbatim the same as he gave earlier in this blog, and while I'm not sure that it itself places it above Beggars' Banquet or Let It Bleed, it's quite spot-on.

Jeebus. You guys have amazing memories...
:-)