From 1978, and their second album You're Gonna Get It, please enjoy the original (and still the greatest) incarnation of Tom Petty and the Heartbreakers and their quite ecstatically McGuinn-esque "Magnolia."

I bring this up because the magnolia tree outside the Q-Boro apartment of a certain Shady Dame of my acquaintance... 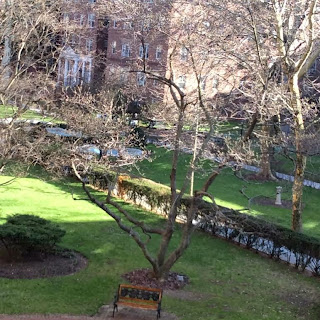 But also because I have been continually amazed over the years to find out how many people of my acquaintance -- people whose opinions I respect -- seem to have an absolutely visceral loathing for TP and company. Most recently, a Facebook pal of mine who is also a first generation rock critic of some deservedly serious repute.

No fooling -- as somebody who considers the Heartbreakers absolutely superb musicians with as impressive a body of work as can be found in American rock, I can't understand the animus. Can anyone help me out here?

You'll never have to twist my arm here. I've always liked TP and company very much from the beginning. A sturdy and stalwart rock band. I don't understand the negativity about him at all.

Well, what do the people of your acquaintance say? Just "they suck", or do they elaborate?

I'm with you, to a point, anyway. (Probably "Hard Promises".) But that first album was NOT off my turntable for a good long while.

Maybe Tom's cap in the picture for the "Magnolia" video might have something to do with it. A lot of rockcrit types just can't hang with what they consider to be "southern rock", and even though Petty didn't get overtly "southern" too often, "Hometown Blues" from the debut was kinda leaning in that direction.

Currently listening to Tom's Buried Treasure show on Sirius/XM.He's a damn fine dj.
Listening to the show got me back into listening to his back catalog, after having not bought much after the first couple albums. Don't know why I neglected him so long, lot's of good tracks over the years. Plus he asked the Smithereens to open for him not long ago,so he's alright in my book!

You're Gonna Get it is my favorite of the Petty albums.

I remember Petty getting a lot harder push from their record company than other bands got at the time, which paid off when Damn the Torpedoes was released. you can argue that once they're signed, all bands should receive that kind of effort, but it doesn't happen, and maybe that's where the rock crit resentment comes from, a little misplaced jealousy.

The Flo Mos covered When the Time Comes, Listen to Her Heart, and American Girl. All of which were immense fun to play.

And they are still playing great, saw them on their last couple of tours and they sounded terrific, both in a small club and in the Forum in LA. I like Hypnotic Eye a lot.

If, like me, you are in love with the pure SOUND of the electric guitar, you've got to love petty and Mike Campbell. They are sound architects!

That said, the Confederate flag thing bothers me. Petty did an entire tour with that as a backdrop.

I also have friends who poo poo me for liking Tom Petty. They consider him lightweight and stupid. But it's their loss as far as I'm concerned. They are one of the best rock 'n' roll bands of all time. Why they can't hear the great roots that Petty and Campbell have absorbed and made into their own sound is beyond me.

The albums may have become spottier over the years, but I scarcely miss a Tom Petty show. For me they are one of the definitive live rock bands.

I have a photographer friend who absolutely loathes the band. But I think that is mostly due to the fact that Stan Lynch stole his girlfriend, mistreated her and didn't have the decency to keep her. So his beef is completely personal.

They're not quite the same without Lynch, but are still what I consider a must see show. I've been catching them since they opened for Blondie at the Whisky in early 1977. I knew nothing about them then and went straight to Licorice Pizza to score their debut LP the day after the show. I love the early stuff and early bootlegs. Love the multitude of classic songs they choose to cover. I almost died when they did "Little Bit O' Soul" live.

Most memorable show was a showcase at the Starwood mid-1977 that was announced to the public the day of. By that time they did have a small but mighty local following. I felt lucky to be there. And Dwight Twilley showed up too. So,....

Vickie Rock - Too much ain't enough

And remember, the sainted Gram Parsons used the Stars 'n' Bars as a concert backdrop, too.

That Petty box set has an incredible cover of Nick Lowe' s Cracking Up.

I wouldn't worry about that old flag, Steve. It was well-suited for the tour in support of the Southern Accents album. An album which is inhabited with unflattering characters who are poor white losers and rednecks in the Deep South.

Tom's no racist. Christ, his drummer is black. There is a duality to the Southern Thing (which refers to another Southern band's work).

I never believed for a second that Tom or the guys in the band were racists. I just felt they had bad judgement in art direction.

I will admit to not loving Tom's voice. But the more I play his songs on my own, the more I appreciate them. And his band is top notch. So, no, not a visceral dislike, but not a fan either.

Steve: I think it's fair to speculate that if Tom was asked about using the Confederate Navy Jack today, he would probably say it was a mistake. But that's hindsight in today's hyper sensitive, easily offended environment.

While I completely understand why people get offended by its display, I still respect the rights of those who want to do so. It's just a piece of cloth.

Many southerners choose to eschew the negative historical aspects and use it as a symbol of southern pride, or the South itself. Personally, I don't have a problem with it anymore than I have with Patti Smith's "Rock 'N' Roll Nigger."

It's not necessarily what one would initially think it's about. I can't remember a Skynyrd show without one on display, even when they opened for the Who at the Forum on the Quadrophenia tour. Come to think of it, it was like the Who using the Union Jack to me.

Oh, and BTW, Petty and the boys do a bitchen version of "Psychotic Reaction" too.

I was lucky enough to be working at Discount Records (South U.) in Ann Arbor when the first album came out, and scored a copy of "The Official Live 'Leg", signed by all of the band. It's very carefully cared for, and I wouldn't part with it for love nor money.

Vickie–I don't doubt that Lynch could be an asshole, but I took my then 12 year old brother (and aspiring drummer), whom I'd trained to like good music, Petty in specific, to see the "Torpedos" tour in Detroit, and (again, record store privilege) had backstage passes. Petty was nowhere to be seen–probably already perched atop some fangirl–but the rest of the band were doing meet & greet, and Lynch–all 6 ft. plus of him– took the time to scooch down and talk to my brother about drums. He didn't piss himself, but was ecstatic for weeks afterwards.

He eventually became a really good drummer, and could play the fuck out of any Petty song you'd throw at him, with me and other brother playing guitars.

Anna - Nice story about Lynch and your kid brother. You're right, Stan is basketball tall. The stuff I mentioned took place before they got real famous, between the first two LP's, but before Breakdown hit. It was simply a case of my friend's long time girlfriend getting starstruck and taking up with the drummer. It happens all the time.

Very cool that you have a signed Official Live Leg. L.A. was record paradise back then and I snagged one of those shortly after it came out in 1977 (why couldn't it have two sides?). What I wasn't aware of until about a year later was that there was a UK version with one more song, "The Wild One." I first laid eyes on one at Moby Disc in Sherman Oaks and snagged it immediately. I've got boots with the rest of that Paul's Mall show.

Petty was cool about doing radio concerts. Being a fan, I got my hands on all the broadcast reels and LP's etc. As great as they were in the beginning, they could be spotty live. I think they became a better live band as the years went on. They still really crank.

I'm trying to picture Petty "perched atop a fangirl" and it's cracking me up. Do you think he might have cared what his wife would think about that? Although he was kinda cute back then, he wasn't what I considered sexy. I did like the way he went from a low southern drawl when speaking to the higher pitched trademark vocals.

Had a younger friend named Gina who cut hair for rich bitches in Beverly Hills. She had a tendency toward obsession and fantasy. Man did she want to get with him! But she never got access, or rather, alone time access. He wasn't as easy as Steven Tyler. For a time in 1977-1978, I'm positive she thought about TP when she touched herself. She had a major case of full moon fever.

I liked the first one quite a bit, and saw them at The Whiskey. I didn't buy any more of his records, but I'm no hater.

Just to add, Tom Petty is a great rhythm guitar player as well. His simple leads on "It's Good To Be King" work for me too. That's a great number in the live setting.