Pursuant to our discussion of the musical legacy of Brian Wilson, here's a Bomp! interview from 1976. It's, well, kind of weird, in pacing and subject matter. (The Fritos vs. potato chips debate is especially odd.)

Everyone loves Brian, but for an interviewer, he's not the easiest person to make talk. Jim Pewter is one of the few who've been able to establish a genuine rapport with Brian under interview conditions. One of the true pioneers in the field of 'oldies' broadcasting, Jim has interviewed Brian several times, going back as early as 1966.

This interview, presented here for the first time in any magazine, provides a fascinating insight into the background, musical influences and early working methods of Brian Wilson, while avoiding the kind of sensationalistic exploitation of his personal problems that most articles have dwelt too heavily on. We feel this material is a timely complement to the renewed interest in the Beach Boys that has helped make 1976 a banner year for rock & roll fans. 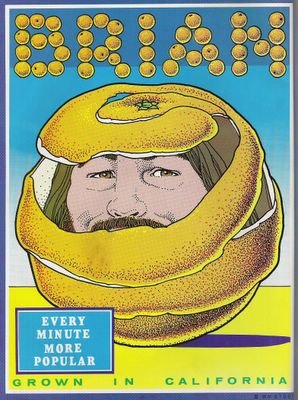 The illustration accopanying the original interview.

(As always, I'm probably violating some sort of copyright here. I'll take the post down if it offends the copyright holders; please contact me.)
Posted by NYMary at 4:09 PM

I love this. The interviewer has gotten closer to Brian than most could in those days. There's something sweet, yet very deliberate about Brian--not faux naive, but still almost willfully ingenuous. He must have been exasperatingly lovable in his prime. For me, he still is, and no one gives me my heart more often than he.

Wasn't it Mike Love who used to show up at Brian's house with a bag of hamburgers and give Brian one for every song idea he came up with?