...if not quite the Holy Grail, then at least something I've been trying to track down for quite a while now.

From 1966 -- if not THE mixed to perfection stereo version of The Rolling Stones' "19th Nervous Breakdown," then at least a pretty good stereo version. 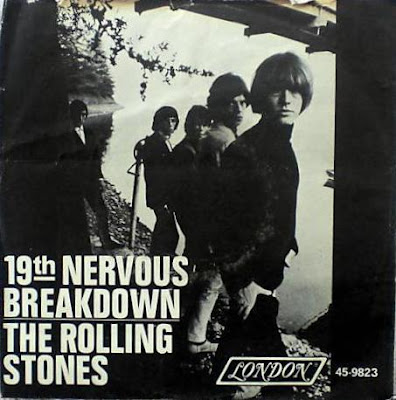 If truth be told, I've always kind of considered this the single most exciting song the Stones ever recorded, so it's been something of a thorn in my side for lo these many years that it's only ever been available in mono.

Okay, granted, there are more pressing issues in the world, but still...

POSTSCRIPT: In case anybody is wondering why I haven't posted a clue to tomorrow's Listomania yet...

Just didn't have time to get one together this week. Instead, I'm taking a break to work on the introduction/foreword/preface (or whatever it turns out to be) to a certain eagerly awaited literary endeavor by somebody else whose name is on the masthead here.

Listomania will return next week, however -- tanned, rested and ready as I'm wont to say. And I'll be posting the occasional odds and sods between now and Monday, time and weather permitting.
Posted by steve simels at 12:02 AM

The Floor Models did an excellent version of this.

Okay, granted, there are more pressing issues in the world, but still...

No there aren't. Seriously.

I don't share your mono/stereo frustration, but there is no denying this song never gets old or too played out.

Nice stereo mix! The very last band I retired from in 2004 was called Tru Brit, a British Invasion tribute project. We did a nice cover of this one. Great Stones song.

Actually, if I get drunk in the next few weeks, I'm gonna post a live cover version by the Floor Models featuring yours truly.

You can really hear what a great guitarist Brian was.

Steve, I'm going to send you some Mogen David. AP

Steve, post it anyway. You know, for the best of the Floor Models CD, remember? Need more songs.

Holy crap, that's incredible. Yes, probably the most exciting Stones cut ever, have to agree there.

I just read an interview with Ringo where he noted that he preferred the stereo Beatles mixes, with no reservations. Me too, although the first time I heard Sgt Pepper in mono I was fairly blown away.

I've always wanted to get a band to play this, but how do you recreate that sputtering little riff that leads into the chorus? And how can the song exist without it?

Actually, the coolest thing about this is that the famous descending bass riff in the fadeout turns out to be...an overdub.

If you listen, Bill's normal bass part is still going on in the left channel with the rest of band's basic track.

I love that bass riff ... that and the "whoomp" at the end of the guitar solo in "Sympathy for the Devil" are two of my absolute favorite Stones moments.

According to Allmusic, it was this very song song that led Tom Verlaine to drop classical piano and take up the guitar. AP

And in case I haven't mentioned it recently...

Guess where the lick in the right channel comes from...
http://powerpop.blogspot.com/2009/11/in-search-of-eddie-riff-occasional.html

The bass sounds like it has reverb or some kind of affect, or that there are three or four people playing. What is that? AP

The cd that I have that has this also has another stereo version of it. (And The Last Time and HYSYMBSITS in stereo). I went nuts last year tracking down all the rare stereo Stones tracks. Satisfaction is also interesting - got it and Play with Fire and Get Off My Cloud on the Japanese Hot Rocks 1. Only one I haven't tracked down yet is Prodigal Son.

See you next week? :P

You have officially released stereo versions of Play with Fire and Satisfaction?

"You have officially released stereo versions of Play with Fire and Satisfaction?"

Yeppir! Ebay is a wonderful thing!

For what to look for, checkout:
http://www.rollingstonesnet.com/ABKCOs.html

Is that vinyl or CD?

I prefer a lot of the mono mixes too. But this is golden! The mix sounds so modern.