Words Fail Me -- The Even MORE Ultimate Edition

Frankie Lymon and the Teenagers... 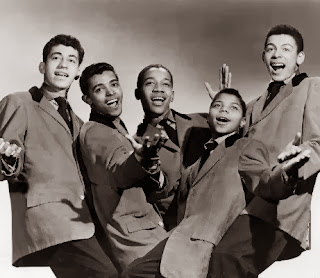 ...absolutely fricking live, with no lip-synching, on the Frankie Laine television program in 1956.

I should mention that Lymon wrote and performed this song at the age of 13.

Sweet Jeebus: To think that a couple of years later people thought Michael Jackson was such a big deal.

Also: Somebody remind me again why I'm supposed to give a crap about that Lorde shit?

But jumping from appreciating Frankie Lymon to slagging Lorde as if the two points were somehow related is just a non sequitur and reeks of get-off-my-lawn-ism.

Agree with Gummo. I get that you and Sal don't like "Royals".

One of the better comments I read somewhere about Lorde was something along the lines that "the millenials now have their own Kate Bush".

I can see that.

Lots of people can't stand Kate Bush, either, but I think Kate was (and is) brilliant.


So, what do you think of American Idol, Steve?

(I ask this honestly -- it's full of teenage singers -- and more singer/songwriters these days...)

American Idol is the kind of show that makes you really miss Star Search.
:-)

"absolutely fricking live, with no lip-synching"
Are you sure about that? Can't see any mics. And in one of the other clips from the same show it's pretty obvious they ARE lip synching.
As for Lorde: she's OK. Not my thing, but I don't see why you and Sal feel the need to trash her.

They're not lip-synching the record; they're singing live with the band from Laine's show. (In fact, they're singing slightly off key, most likely because they can't hear the band all that well.)

And in the early days of tv you almost never saw microphones on this kind of variety show.

I was noticing they were off-key too, but only between the band and singers (singers are in tune with themselves). I suspect you are right Steve. The fact that they are out of tune almost proves it is live, IMHO.

They're not singing off-key, they're singing in a LOWER key - I suspect that was because Laine's orchestra wanted it that way. That tells me how talented they were as true teenagers - to smoothly transpose to a lower key a song they had just recorded.

Either that, or Lymon had a cold and couldn't get up higher - but I suspect it was the orchestra leader that tried to screw up the little brat rock and roll delinquents - and ended up getting taught a thing or two.

God, I hope Paul Westerberg still owns the copyrights to Swingin' Party so he can get royalties from this awful Lorde cover. Oh, and maybe The Replacements will get some exposure from this. They deserve 1,000,000 YouTube hits, not Lorde.

"As for Lorde: she's OK. Not my thing, but I don't see why you and Sal feel the need to trash her."


A "need" to trash her? Not sure I agree that I was "trashing" her as much as I was trying to point out that mediocrity is the new fantastic. If anything I was trashing the position of the bar, which as I said on my page, has not only been lowered, it's been buried.

I just long for the days when great records were truly great and not accepted because they are "better than the other crap out there," which seems to be the go-to line for 90% of the Top 100.

Just for comparison's sake, this one is lip-synched: