The hilarious Bob and Ray, doing to that stupid Rod Stewart song what always deserved to be done to it.

Incidentally, although I've been a fan of those guys since I was a kid, my first exposure to them -- odd, given that they were primarily radio comedians -- was in the pages of MAD Magazine, as witness this splash page from a piece (drawn by the great Mort Drucker) from 1957. 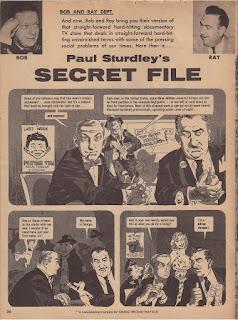 In any case, with Elliot's passing, the world is now, officially, a much duller place.

I was trying to explain Bob & Ray to my teenage daughter this morning, and I don't think I had much success. We were in the car, so I couldn't just fire up the ol' Internet. Explaining humor is always a challenge, but explaining Bob & Ray...

My first exposure to them was in Between Time and Timbuktu, a movie made from strung-together Kurt Vonnegut stories & broadcast, I believe, on public television in the early seventies. Haven't seen it since then, but I remember Bob & Ray were great as Walter Gesundheit and ex-astronaut Bud Williams, Jr.

Here's part 1 of Between Time And Timbuktu. Bob and Ray make their appearance at 2:53:

An Australian Bob and Ray fan. The mind boggles.
:-)

Not only that, I'm a huge Vonnegut fan.

Perhaps the quietest big influence on modern comedy. Nobody did understatement like Bob and Ray, and nobody focused on mild outsiders like they did.

Wow. I'm surprised that either of the two guys were still alive. He must have been ancient. Saw them on TV a bunch. Loved that Between Time and Timbuktu movie. Think it was on PBS. I had a good buzz on and watched with my beloved Uncle. William Hickey as Stony Stevenson was terrific.

There was also the Huntley-Brinkley parody from Norman Lear's Cold Turkey.

At least he lived a long life.

Perhaps the quietest big influence on modern comedy. Nobody did understatement like Bob and Ray, and nobody focused on mild outsiders like they did.

Describes their humor perfectly. They were like Bob Newhart in that way.