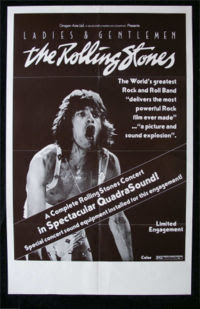 Sorry for the blogwhore, but my thoughts on Martin Scorsese's Rolling Stones concert film Shine a Light versus the in many ways superior Ladies and Gentlemen, the Rolling Stones -- currently unavailable on DVD -- can be found over at Box Office.

What I didn't mention over there is that there's a certain irony attendant to the earlier film. There's no question that the 1972 Stones in LAGTRS kick major butt compared to their Sixty Something incarnation in the Scorsese flick, at least musically speaking. Still, it's kind of funny that the '72 tour, which pretty much defined/invented rock 'n' roll decadence/wretched excess (Truman Capote and Margaret Trudeau eating truffles backstage) was also the precise moment when the Stones began their metamorphosis from personification of the music's outlaw spirit into the efficient, but by comparison soulless, corporate entity that they are today.
Posted by steve simels at 11:47 AM

I saw them on that tour, at Boston Garden ... that was my first Stones show. Aside from seeing the Beatles at Shea, that was the largest music venue I had ever been to. I can't say I enjoyed it ... it felt crazy and confrontational, and yet distant.

Once a band loses physical intimacy with its audience, I can see how easy it would be to become somewhat disconnected from the musical performances, too. Especially once the novelty wears off.

I've seen the Stones a lot more often on film then live. The camera does give a intimacy that a stadium show never will.

And let's not forget "LAGTRS" was a last-minute substitute for "Cocksucker Blues" and somewhat panned at the time...