Okay, this one slays me. From 1972 and their Teenage Heaven album, it's the legendary-in-Australia Daddy Cool and their wonderful and wonderfully self-referential "Daddy Rocks Off." 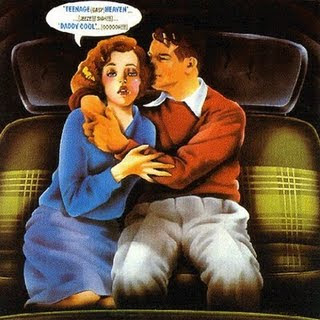 The short version is that I used to have this album -- a consequence of being on the Warner Bros. Records freebie list as my old college paper's in-house rock crit -- and although I vaguely recalled likeing it (or at least some of the songs) I lost my vinyl copy ages ago and since then couldn't have remembered what it sounded like if you put a gun to my head. So when it turned up on the estimable redtelephone66 site the other day, I downloaded it out of basically idle curiosity.

The song in question is, in fact, an absolutely delightful moronic/genius three chord garage-rock hybrid with a monster swampy blues/rock groove and attitude to spare. Fabulous stuff, and what a pleasure to rediscover it.

I have since been informed by commenter Peter Scott, who blogs about Down Under bands over at Peter's Power Pop, that these guys are about as iconic as you can get in Australia; their biggest hit -- "Eagle Rock" -- was Number 1 on the Ozzie charts for ten(!) weeks back in 1971. Peter also informs me that said hit is so utterly ubiquitous in his homeland that it took him years before he could get over being sick of it and actually appreciate how great a band they were.

Anyway, as I said, "Daddy Rocks Off" just slays me; you can download the entire album, which is well worth the effort, over here.
Posted by steve simels at 12:01 AM

Note to self: Posts about completely obscure Australian bands of the early 70s less interesting to readers than deliberately contentious snarks at iconic pop figures.

I love the minimalist genius of the lyrics.

To paraphrase Mick Jagger, I can't give this one away on Seventh Avenue.
:-)

Thanks for the mention, Steve.

Given the relatively lower-than-usual number of comments for the post, it looks like you're the only member* of America's One-Man Daddy Cool Appreciation Society.

Never mind. If you want to share your enthusiasm for the band, come and live in Australia. You'll be guaranteed to hear Daddy Cool on the radio at least once a day, plus their discs – including an indispensible (for Daddy Cool fans) two-DVD set entitled The Complete Daddy Cool – are ready available.

So, what are you waiting for? Book that ticket! Come, join us!

Wrong. I dearly love Eagle Rock. Saw 'em twice in L.A. circa 1972 - once on a bill with Captain Beefheart. Coupla cuts on the second album also quite good - especially Teenage Blues (which the Flamin' Groovies wish they'd cut it.)

Excellent. Maybe we can get a multiple-ticket deal from the travel agent.

So, that's Steve, Maude, and possibly Brooklyn Girl. Any others?

I'm more than ready to welcome you all.