From the just released (and conceptually unlikely, at first pondering) tribute album Drink a Toast to Innocence: A Tribute to Lite Rock... 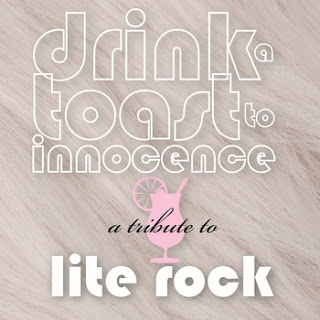 ...and former Merrymaker David Myrh and his take on 10cc's forever gorgeous "The Things We Do For Love."

Obviously, tribute albums are at best dicey propositions -- if your cover of a familiar song is totally faithful, who gives a shit? and if you're re-imagining the song just for the sake of re-imagining it, who also gives a shit? But this album is particularly interesting, for me anyway, because with a couple of exceptions (like the 10cc) most of the songs being covered here are either guilty pleasures or genuine irritants. And in the case of several of them -- the Cliff Richards song, for example -- I had never really considered that there might be, to paraphrase Gerty Stein, a there there.

The bottom line, of course, is that your take on the album will probably be different than mine on a song to song basis, but I think overall its well worth hearing.

You can order it over at Amazon here.

And mad props to my new chum (and most gorgeous Hungarian since Ilona Massey) power pop auteur Elizabeth Racz for associate producing it.

Pretty damn good. Not crazy about the 10cc cover, but maybe its the video. The guy's kind of douchey. The version isn't strikingly different and it's not an improvement.

Otherwise, some nice AM sugar, largely from the Seventies. These tracks were so catchy that somehow we all remember them even if we shunned them.

Get out of the closet and enjoy.
Amazon sez: Only two left. I got mine at Amoeba a while back. They were playing it in the store and it was an impulse buy.

Disc 2 falls apart for me with the last three tunes. "Wildfire?" Huh? "Fooled Around," and "So Into You" seem rather out of place as well.

Stuff like Souther-Hillman-Furay's "Falling In Love," and Pablo Cruise's "Love Will Find a Way" would have been nice. I had a late Seventies fling with another girl who was really into this soft rock stuff. So I know it well and it brings back memories.

It's funny. She was engaged to this cute, rich "Christian" guy and she insisted on absolute discretion. Her boyfriend was pretty clueless though.

Even funnier, I set her boyfriend and his friend up with two of my out-of-town girlfriends at a party. I was with my guy and the six of us checked into a motel. They took the double queens and we retired to the bathroom.

Afterwards, the "Christian" boyfriend begged me to swear to never tell his betrothed girlfriend what happened. His secret was safe. And so was mine. Believe it or not, they're still married.

When does your book come out, Vickie? You really should be writing one!

I love this comp. They could have extended it to a 3rd CD and I would have loved it that much more...

I never thought I'd be saying this, but the guy who covers "Escape (The Pina Colada Song" absolutely slaughters it! And btw, the British Elvis is caled Cliff Richard - not RichardS.

I forgot to mention the cover art. That's the best they could do? What was the design budget? Seems like anyone with a cheap computer could have improved on that.

Inside are pretty tasty reworkings, though, and that's what counts. So don't judge it by the cover.

What would your third disc include Shriner? Just curious. Would you include any Gino Vannelli, Hall & Oates, Bread, The Movies, more 10cc? I'd go for another Ambrosia tune, after all, they're San Pedro's finest. David Pack is a very talented guy.

Not that it would be suited here, but I've always loved Bread's "Been Too Long On the Road." To me, that's a Gates masterpiece.

Sad but soooo true. That's what the skip button's for. They're definitely not all winners.

Steve: It seems that Fudley Correctol-ism has taken hold. Like a ripple in still water. Like the hundredth monkey.

With re: to Cliff Richard, those "D" and "S" keys are pretty damned close together. You could have fat-fingered them. But you did it twice. So, you're busted. Perhaps a little corporal punishment in order.:-)

Third disk (thematically -- meaning one-hitish-wonders -- and not duplicating any artists -- and also for songs that are ripe for reinterpretation) would probably be:


That's 16 right there. Coming up with a 4th disc would probably be just as easy.


This practically sells itself. Well, at least to me. ;-)


But I'm guessing (and know) there are already great PowerPop covers of some of these songs out there somewhere already...

Oh, and there's another video from this album here:

Shriner: Great choices! Hard to argue with them. I would have preferred some of these over what's on the 2-CD set.

Seems like some Rubinoos and Greg Kihn would be in order too.

Long Dark Road by the Hollies seems like another of their's that could be reinterpreted to good effect. Plus the Badfinger stuff.