So I just got a copy of the new Rolling Stones 3-disc sort-of best-of album Honk (don't ask).

As you might expect, the Greatest Hits section -- which derives, partly, from every official Stones studio album since they started their own label -- is a fairly depressing document of their devolution as a creative force since, oh, maybe around the time of Some Girls, although I was surprised to find that their recent blues record wasn't as bad as I remembered.

The third disc -- which is all recent live stuff, often with guests -- has its moments, however. And, because I love you all more than food, here they are.

A pretty cool version of "Bitch," with Dave Grohl. 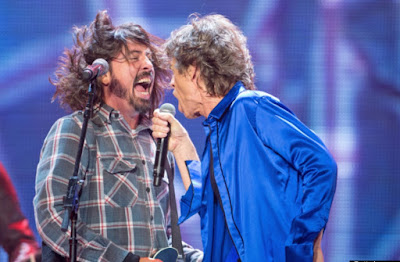 And a really fabulous "Dead Flowers," with Brad Paisley (who sounds, in the immortal words of Ian Hunter, like he's wanted to do this for years and years).

You're welcome.
Posted by steve simels at 10:25 AM

You're right- both of these are excellent, Paisley's especially. Never get sick of Dead Flowers.

Steve,
sadly I agree with your "devolution" of the Stones citing "Some Girls" as their artistic last gasp. This is coming from a guy who as a young kid had the "Mothers Little Helper" 45 cover scotch taped to the bedroom door.
Damn thing is that I recently saw then performing "Like A Rolling Stone" and damn,a brilliant cover.
Its so hard to criticize a band that has stuck together, remained alive regardless of their predilictions.
Can you imagine what the "Beatles" would be today if they had stuck together ?

To be fair, a couple of the Stones 80s albums have interesting moments.

Recommended if you love Dave Grohl, Brad Paisley, Florence, and Ed Sheeran AND don't already own Made In The Shade, Time Waits For No One, Rewind, Jump Back, Forty Licks, or GRRR AND every other set that includes "Brown Sugar" and "Wild Horses".

As has been mentioned, both tunes are killer.

Emotional Rescue, Steel Wheels, The VooDoo Lounge, and A Bigger Bang all have some pretty good stuff on them.

Love dead flowers. The chorus is so friggin awesome. The juxtaposition of the rousing music with the heroin references is wonderfully weird. Curious which solo's Brad Paisley is taking? Just the last one? And on bitch, is that Darryl Jones on bass? He is stealing the show.

Devolution? A band that's been together for fifty years is going to repeat itself a lot, over time. Songs are going to become generic, tactics predictable. There's only so much new anyone can do. I think the only real indicator of their ongoing quality is to sit one of today's teenagers down, a kid who's never heard them before, with a recent album or, even better, at a show and see their reaction. If my experience with students is any guide they love it - even if it's not up to the standard the Stones set in the '60s, which is an impossible standard.

I would not argue with that assessment.

Are you redacting your TMFKASR review of Tattoo You? It's a stronger record than Some Girls. JMO. (Mr. Greenblatt died, you know.) Neither can compete with Sticky Fingers, of course.