I generally eschew discussing politics in this forum for two reasons. One: the vast majority of my readers are roughly in agreement with me, so it's usually unnecessary, and we meet up at other places to have that sort of conversation. Two: for those who aren't in agreement, it seems rude and exclusionary and generally not appropriate.

So I'm not going to ruminate upon what I think of this video. I'll let the newly famous and unmasked Rude Pundit do it for me.

Now, in the video for the seemingly straightforward power ballad "Wake Me Up When September Ends," Green Day makes an answer to every Army-of-One bullshit ad. The video begins with a sappy teen love story, complete with the music low and the dialogue audible, until we see the weeping teenage girl going up to the teenage boy, begging to know if what she heard is true. The boy explodes that she doesn't understand, and then we see what they're talking about, with the boy going off in a bus, having his head shaved, being trained by the military, and sent to an urban battlefield that is presumably Iraq.

There, guitars peaking in the background, we watch as the boy's patrol comes under fire from an unseen enemy, with explosions and bullets all around them. As he watches his fellow soldiers being hit, we see the boy, scared, confused, hidden in one of the bombed out buildings. The thing is that it's filmed as if it is one of those Army or Marine ads, except it looks fucking scary. And then it ends with the teenage girl back at home, sitting on bleachers. We don't know if the boy lives or dies (perhaps there's a sequel in the offing?), but we know that the innocence of the early part has been compromised, and that there's no way that girl and that boy can ever connect again.

Simple. A bit sappy. And as effective as a mallet to the head. Or that bleeding heart grenade on the cover of the album itself.

I'll also note the role of economics subtly implied in the video: the girl pays for their fast food, and the boy has no suit when they wed, so it seems pretty clear that there's a class argument on the floor as well. His insistence that "I did this for us! I thought you of all people would understand!" is gut-wrenching, ripping away the veneer that "only true patriots join up," or whatever invective is being slung at folks like Cindy Sheehan this week.

Look, I know these kids. I teach in a small town community college. More than that, I come from the working class and while, in some places, each generation may expect to live a little better than their parents, in my world, each generation lives a little worse. Thers and I both work to maintain the house my father built on one salary, and the children of my siblings are struggling to pay for educations and even to find jobs. One of my nieces is married to a man who was talking to recruiters as a way out of financial difficulty: that's what I think of when I see this video. Important difference though: they have two kids under three. Green Day probably thought that would be too overwrought and melodramatic, however.
Posted by NYMary at 9:02 AM 6 comments:

The club has been some kind of symbol for decades. The question is whether that symbolism can transcend real estate and real noise. A transplanted CBGB would be irrevocably changed, and an artificially preserved one could be just as dicey. Punk-rock certainly has enough artifacts to fill a museum, but solemn academic inquiry just doesn't seem right for CBGB. A transplanted CBGB might become something like the Cavern Club in Liverpool, where the Beatles woodshedded and which was demolished and rebuilt as a replica (with some of the original bricks). What has been a symbol of unlovely urban survival would turn into a self-conscious icon.

Or, to be precise, a more self-conscious icon. It's hard to say how long ago CBGB started considering itself legendary, but decades is a fair estimate. While punk promoted itself as overthrowing the status quo, CBGB has prided itself on staying put.

Everyone knows CBGB is a dump, same as it ever was: a place where punk spirit holds out against gentrification, a remnant of the old stinking Bowery versus the slick NoLIta. CBGB & OMFUG (which once stood for Country Blue Grass Blues and Other Music for Uplifting Gourmandisers) started out as a neighborhood joint and never upgraded much beyond its sound system. It's had chic visitors, but it never turned chic; even as it became a tourist stop, as it has been at least since the early 1980's, it stayed dingy, a place where kids could still afford to hang out. Mr. Kristal hasn't profiteered unduly.

The post-punk and no-wave bands that are now being widely imitated also had a home at CBGB as the 1970's turned into the 1980's, and so did hardcore matinees. But in the years since, well, it often seems that all a band needs to get a CBGB gig is a wacky name. Musicians like P. J. Harvey and Guns N' Roses, who were grateful for what they learned from the first CBGB bands, have performed there by way of tribute. But it has been a long time since the club was the crucible for a movement.

In some ways, CBGB is a victim of one of punk's enduring myths: that amateur enthusiasm is all a band needs. All the stickers on the walls prove otherwise. What made the first CBGB bands important wasn't that they were amateurs, but that they were inspired amateurs; they had a sound in their heads, one that didn't require too much technique. 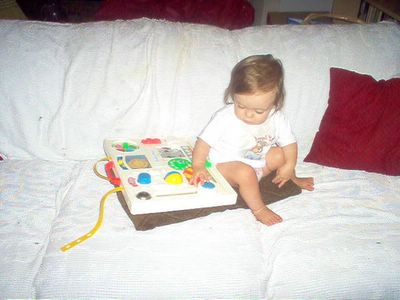 Rosie contemplates the wonders of cause and effect.

Things have been getting hairy here, what with EschaCon looming, a family reunion, home improvement, kids on vacation, and two summer classes. Just wanted to let ou know I didn't forget, and have a few posts stewing and some back Babyblogging for you. So watch this space over the next few days as I get caught up.
Posted by NYMary at 9:11 AM No comments: