Those who know me well will be terrified to hear that I am not, in fact, the biggest Shoes fan I know. That honor goes to a fellow who lives out near Buffalo, a musician and recording engineer whose obsession dwarfs my own. Anyway, courtesy of PJ I offer this vintage Shoes pic, which he sent me asking me to guess the date. 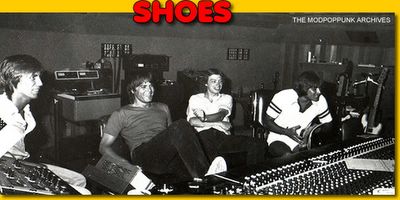 I'm going with California 1980, for the simple reason that there were only four albums made with four Shoes, and one was made in Zion, one in England, one in California, and one in Chicago, nocturnally. Ergo, only one of those sessions was likely to feature the kind of skin color clearly in evidence on both Gary Klebe (second from the left) and Skip Meyer (far right) here. QED: the Tongue Twister sessions. I remember on my little ShoesNews postcards (and yes, I still have the vast majority of them in a box somewhere) a note that Skip Meyer finished all his drum parts in like two weeks and spent the rest of the time on the beach. (Note the paleness of the Brothers Murphy here: we Irish generally know better that to court disaster in the sun.)

Update: Jeff Murphy just wrote to assure me that yes, as we all suspected, I AM A GODDESS.

Thanks to our friends at Bedazzled, I present this supercool video clip of The Boxtops. Have fun at Bedazzled: it's a hoot!

We're all relieved the rumors about Alex Chilton being lost in Hurrican Katrina turned out to not be true: but it looks like Barry Cowsill is still unaccounted for.
Posted by NYMary at 6:57 PM No comments:

Near Occasions of Sin

Raised Catholic, I have a profound sense of sin a lot of the time. When I was a kid, we ended every schoolday with the Act of Contrition, wherein we promised God to "sin no more, and to avoid the near occasions of sin."

See, a near occasion of sin isn't a sin exactly, it's just the kind of situation where a sin is kinda sorta likely to occur, and so one steers clear of such things so as not to be tempted.

Bet sometimes, sometimes, the near occasions of sin find you. Two of my faves, Steve Lawrenson and Milton and the Devils Party, are sharing the stage at IPO in Philly this year. Same night and everything.

And it's my birthday.

NTodd's coming, and we're gonna be busy for a few days, but here's a present for you. Courtesy of irregular Eschatonian preznit give me turkee, I offer the following:

There are few pony-themed pop-songs, and with numbers consistently below 40 now (we know what we mean), Holden deserves all the ponies we can throw his way. Here, then, is my humble offering. (Hey, it's a lot better than "Horse With No Name!")

And in honor of NTodd, who also wants a pony, I offer a winter song: The Smittens, "I Hate Vermont."

FWIW, I also like one of Colin Clary's other bands, Colin Clary and the Magogs.
Posted by NYMary at 7:46 PM 8 comments:


TMBG perform in Katrina benefit this Sunday
TMBG will be jumping up on stage for a short set with 8 other fine acts as part of a Katrina Benefit this Sunday, September 25th @ Southpaw in Park Slope in Brooklyn. You can do your part just by showing up for the good times. ALL proceeds will go to the American Red Cross, Second Harvest and Humanity First. Joining TMBG will be the pride of New Jersey, The Wrens, and our Barsuk Records pals Matthew and Ira from Nada Surf.
Go to www.BrooklynResponds.com for more details.
Tickets are a very reasonable $15 at www.ticketweb.com

Southpaw is a nice club: we've seen the Pernice Brothers there and a fun band called Feast (true: I know the lead singer's mom, and knew her when she was maybe 10). It's a great place to see a show, and a good cause, and if I could go I would.

Also, there's a new TMBG video at their site, here, for "Damn Good Times." (You, er, have to hit targets until the center shield offers you the video option. But how often do you get to make Teddy Roosevelt harrumph?)
Posted by NYMary at 6:24 AM No comments:

I'm sick and discouraged, but heard this twice on my drive yesterday: once by The Hollies, once by The Posies.

Presented, then, without political commentary, a song for our times.

If you could only see me
I know exactly where I am
You wouldn't want to be me
Oh, I can assure you of that

The Thing About the iPod Is....

it reorders music randomly, and if you have whole massive chunks of your music collection on there, like I do, you hear things in unexpected context, juxtaposed with other music, and it makes you listen differently.

It also makes you develop obsessions with bands about whom you know nothing, except that someone gave you a CD with a song of theirs and it came up in the mix and got in your bloodstream.

Ergo, Hotsocky. The song is "Love's Sick," and it's a perfect moment of powerpop effervescence.

I can find nothing about this band. Their website is mostly blank, their allmusic entry likewise. But from various reviews I gather they're an NYC band, I know the members' names (one was in Thin Lizard Dawn, which is obviously supposed to mean something to me but doesn't, really), and they have one CD which came out in 03 or 04. I found them on a Not Lame comp given to me by a musician friend, and now I anxiously await their CD, which I've ordered from CDBaby. (Seriously, listen to that riff at the beginning of "Love's Sick" and tell me it doesn't getcha.) Beyond that, all is darkness.

Can anyone help me out? I'll report back again when I receive the CD.
Posted by NYMary at 7:06 AM 5 comments:

What with one thing and another, I missed the fact that Madame Wong died last month. 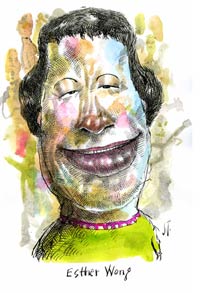 The native of China originally booked Polynesian bands to play at her restaurant, but when hardly anyone showed up to hear them she decided to take a chance on rock acts. Almost overnight in 1978, hundreds of people began showing up at her Chinatown restaurant to hear the new sounds, and she opened a Madame Wong's West in Santa Monica that same year.

As her clubs flourished, Wong quickly became known as a no-nonsense proprietor. She once halted a performance by the Ramones until the band members left the stage and cleaned up the graffiti they had put on a bathroom wall. She rarely booked female singers, calling them "no good, always trouble," and she was known to go into the audience to try to sniff out marijuana smokers.

"She would always take any problem or situation head-on, she was not afraid of anyone," her daughter told The Associated Press.

Wong auditioned performers by listening to their tapes, often while driving in her car, until she said her habit of flinging bad music out the window nearly got her in trouble.

"One day I almost hit the highway patrol car that was right next to me," she told the Times in 1980.

She was a character, and very important in the power pop movement of the late 70's. Everyone played there, including The Knack, the Go-go's, X, The Police, Oingo Boingo, and 20/20, the latter of whom who were regulars.

(Thus my skepticism of Doug Fieger's assertion, in the documentary Getting the Knack, that he did not know who 20/20 were, that The Knack were calling themselves 20/20 when the Oklahoma band was noted on the cover of Bomp!, and Fieger claimed to get excited, thinking it was his band that had gotten the press. I guess it's theoretically possible, but it's not very bloody likely, that he had never heard of them. Other useful things I learned from Getting the Knack: if you have a really serious cocaine problem, heroin takes the edge right off! Good tip!)

In any case, Madame Wong was a name I knew from the music press ages and ages ago, and while I wouldn't exactly call her a patroness of the art of power pop, no doubt her willingness to open her club to these bands helped break the logjam of disco and club music in the period.

A report on the memorial service from L.A. Weekly.

Thanks, Madame Wong! Rest in Peace.
Posted by NYMary at 7:51 AM No comments: 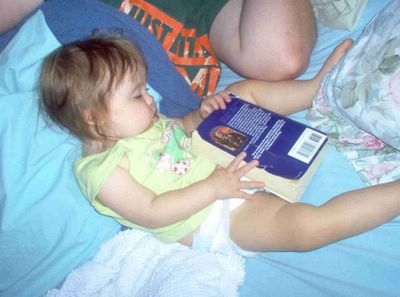 Yes, Rosie is cuddled up and sleeping with The Two Towers. Oh dear.

I wasn't really planning on getting back to the site until after EschaCon--the beginning of the semester and the Con and worry about the poor of the Gulf Coast and just general stress sucking up all my time.

But sometimes tragedy even touches the most frivolous of blogs, as this undoubtedly is. Among the missing in Hurricane Katrina: power pop grandad Alex Chilton.

It's impossible to get your head around the concept of so much death, so much suffering. To know that not all, but at least some of it was avoidable. But this personalizes it, makes it tangible. And to the ache of lost opportunity, the much awaited Big Star reunion album, Big Star in Space, was due to be released in three short weeks.

I just saw this at NOLA.com's missing persons message board

Simels is going to be so relieved, as am I. Wonder if the tour is still on?
Posted by NYMary at 4:53 AM 1 comment: