Some Chills Down the Spine: A Review of Sloan’s Steady

In the coming days, I’ll be unspooling the strange journey I’ve been on for the last two-ish years, but today I want to unpack the most recent gift from our friends from the north, Sloan’s new album, Steady, which came out Thursday.

Everywhere you look in Powerpopland, you’re going to find people gushing about this record. The original vinyl pressing started arriving at people’s houses about ten days ago; mine got here last Wednesday.  (Available in the US from YepRoc.) It’s a gorgeous package, tones of silver on black, and inside, a glorious pink sleeve and purple vinyl. The band has been very careful to manage their visual presentation as well as their musical, and so it’s no surprise that it’s attractive. But we are music people, and as music people, you want to know what’s inside. 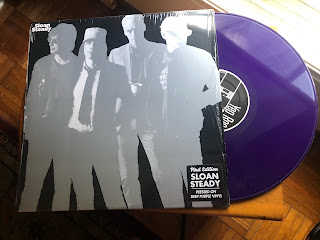 It’s a Sloan record, which means everything comes in fours: four writers, four singers, four distinct songwriting styles. You can count on bassist Chris Murphy for wry observation and wit. You can count on Andrew Scott for Dylan-esque reflections on modern life. You can count on Jay Ferguson for lush portraits of moments in time. And you can count on Patrick Pentland for killer melodies and raw emotion. But there’s something about the blend which is inexplicable. I often say that music is the only magic I believe in, and that’s true of Sloan more than almost any band I can think of.

Side A leads off with Murphy’s “Magical Thinking,” a sardonic catalog of the rationales offered by the sort of people who think the universe or the tarot or their horoscope or their Meyers-Briggs type will manifest itself just because, seeing to it that the world behaves as it’s supposed to, rewarding the just and punishing the deserving. Kicking off with a fairytale harp flourish, the song is driven by a low guitar and bass riff that is both melodic, and just a little dark, as is the song. That’s followed by “Spend the Day,” the first song released from this record. (YouTube tells me the video was posted three months ago: it doesn’t seem like it could possibly be that long, but I’ll take their word for it.)  Patrick Pentland’s signature driving guitar underpins this invitation to avoid the world and “hide away/spend the day/ in here with me a while.” Tempting.

Then we turn to Jay Ferguson’s character sketch of a female ghost writer on a seemingly endless journey, “She Put Up With What She Put Down.” It’s a beautiful jangling pop song, Ferguson’s trademark, with the deceptive fragility so many of his songs have. (For longtime followers of the blog, I would argue that Ferguson is the “Shoes-iest” member of Sloan, for that reason.) I want to stay focused on this record, but it would be remiss of me to pass by this song without noting that the way Ferguson writes about women is extraordinary. Early on, he relied a bit on the distant goddess trope (thinking here of “Snowsuit Sound,” from Twice Removed: a song I love, but which I think buys into a certain framing he later outgrew). The first time I really noticed it was in the gut-wrenching “Light Years,” from Never Hear the End of It (2006), which I hear as the song of a person in love with an addict. But it’s not cruel or dismissive: It’s not “Kicks,” it’s not “The Needle and the Damage Done.” It’s sympathetic and poignant, and even a bit hopeful. But my favorite Jay song in this vein is on Commonwealth (2014): “You’ve Got a Lot on Your Mind.” I wasn’t looking at the lyrics, and I didn’t know the song, but when he sang the title and immediately followed it with “and I hope that you say it”.... I…. Look, the woman who never shuts up is a standard misogynist trope. The idea of a song that invites her to speak? That’s huge. And it's followed two songs later by the extraordinary “Cleopatra,” which is similarly empowering. I’ve digressed too long, but the point here is that Ferguson is just a really strong, really sensitive writer of women characters, and “She Put Up With What She Put Down” is another beautiful piece in that body of work.

We return to Chris Murphy for the piano-driven “Human Nature,” a rumination on the complex relationship we all have with gossip. It’s a lovely, contemplative work, and (because it’s CM) has a delightful Oscar Wilde twist at the end. There’s a great video of Murphy and indefatigable Sloan jack-of-all-trades Gregory Macdonald performing it live here. That’s followed by the Pentland-penned “Scratch the Surface,” a pop masterpiece about the alienation of city life and the false consciousness we fall into. This song became the first official Sloan video since 2011, and it’s charming: each of the members doing something characteristic (Andrew paints, Jay looks at records, etc.) interspersed with stunning drone footage of Toronto. The side closes out with the first Andrew Scott song on the disc: “Panic on Runnymede.” Like many of Scott’s songs, the lyrics are somewhat opaque, but the harmonies are gorgeous and the guitar work, especially at the end, strong. Plus, we get to hear from the dogs, which is always a treat.

Side B opens with two bangers: these may well be my favorite songs on the album. “Dream It All Over Again” could easily have been the album opener, representing as it does the by-now-standard report on how Sloan is dealing with their somewhat unusual cultural position. They’re pretty philosophical about it at this point: “If you wait a while /Then we’ll be back in style /But if you lose your thread /We’re never hard to find.” The real joy in this one is the back and forth between Chris and Jay, and then the soaring harmonies when they all come together. It’s just gorgeous. And “Nice Work If You Can Get It”? Holy. Shit. It starts out with a riff ripped right out of the mid-60s. It has kind of a “Day Tripper” vibe initially. But then it launches into these extended harmonies which put me in mind less of the Beatles than the Records in their heyday, and that chorus in unison? That is pure 1979, and that’s about the highest compliment I can give. It’s just perfect: that riff, that melody, those harmonies. Perfect.

It’s followed by a Patrick Pentland song unlike anything he’s done for a good while. Starting off with a Ronettes drum bit, it’s the softest and most pain-filled song on the record, about the loss of a relationship. But instead of focusing on the wrongs of the other person (like, say, “Backstabbin’” or “Unkind”) this song is just raw grief. Pentland has never had a problem wearing his heart on his sleeve, and it has served him well. It serves him well here, too. It’s beautiful, and heartbreaking.

When the next song, Scott’s “Close Encounters,” begins, you’d swear it was a Jay song, starting with a kind of mid-70s soft rock vibe, and when Scott comes in, it’s a delightful surprise. It’s a beautiful piece, reflecting on, among other things, the ongoing Covid crisis, though he uses the mask as a metaphor for hiding oneself more generally. He even makes a Murphy-ish plea: “So love your brothers /And your sisters the same,” because, you know, it’s all we got.

Murphy’s “I Dream of Sleep” is, and I am not kidding, a country song, pretty unusual for Sloan. (Do we have to go back to “I’m Not Through With You Yet”? Maybe.) But Murphy’s relentless calculation and checking the clock is familiar to any insomniac, and by “any insomniac,” I mean me, who just finished a month of 2 and 3 hour nights. This one is maybe too close for me to assess fairly. The album rounds off with Ferguson’s “Keep Your Name Alive,” driven by another of those tasty riffs. It’s an interesting closer, and for a band like Sloan, who have rarely been off the road for long over the last (checks calendar) decades, the question of whether “you have to leave your home /To keep your name alive” is a little existential. Maybe this is a hint that their punishing road schedule can’t go on forever.

I expected to like this record, maybe even to love it. But I didn’t actually think it would meet my newbie-enthusiastic expectations. This is the first Sloan release I've been conscious of as it dropped, and it's a tremendous record, full of juicy nuggets of melodic pop-rock and callbacks to the giants of the genre. Sloan has done a masterful job here. Run, don’t walk, to get this one.

Email ThisBlogThis!Share to TwitterShare to FacebookShare to Pinterest
Labels: Sloan

Today, we bid a very happy birthday to this blog's backbone, the man who kept the fires aglow and the posts a'coming, my friend and yours, Mr. Steve Simels.

A sharp-as-hell observer of all things musical, cultural, and political, Steve has been wowing us with his words for fifty years. 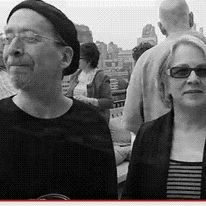 As many of you have noticed, Steve has been scarce around here lately. He's been dealing with a serious health problem for the last few months, and has been largely incommunicado.
I share with you this post from his partner, Wendy (pictured with him here) :

Tomorrow is Steve's birthday. I haven't posted anything about this, but he is having serious health issues and isn't home. It would  mean a lot to me if you could send good thoughts his way ...  thanks.

And so mazel tov and many happy returns to our fearless captain and a a wonderful person: Steve.

Well, hello, strangers! It's been a good bit since I've stomped on these home grounds, and a ton of stuff has happened. I wrote a book, we had a pandemic, you know... stuff.

But I assure you, my love for our genre has never flickered for  second. I spent a ton of lockdown staring at a computer, doomscrolling--but I'm sure none of you did anything like that--and listening to bands who had never crossed over my transom before, or if they did, I didn't register it. But if there was any joy there, it was that I had little to do except listen to music.

Which brings me to Sloan.

My friend Bill insists we caught the tail end of a set in early 2000, opening for GBV. Maybe? I had a newborn; I'm pretty sure I missed that show. My sister-in-law insists that she had spent literally years in the 90s trying to turn me on to them. Maybe? She wasn't someone I looked to for new bands, I guess, so I probably nodded politely.

A heartbreaking waste of time, if either of these things are true. Because when I fell, I fell HARD.

You all will understand what I mean when I say this: Sloan pierced the fog of my lockdown haze. Everything was gray and dangerous and lonely, and these, I dunno, tendrils? of music kept reaching out to me from my computer. It was words at first, odd little phrasings.

What's so bad about dying anyway?

I guess you caught me lying to myself.

You get rough, attack my self-esteem /It's not much, but it's the best I've got.

We've all been in one situation or another we regret.

She don't know what it means, she just knows that it's not what it seems.

Every now and then, I'm reminded that you /could say goodbye and then vanish from view.

They all struck me as profound and beautiful and just, you know TRUE. And they spanned almost 30 years, because I received Sloan in a tsunami, all at once.

Over the next few weeks, I'll be unpacking this weird journey I've been on, which gave me structure and kept me sane. I hope you'll enjoy it.