The Color of Money

According to London's Daily Mail, Mick Taylor, former Rolling Stone and one of the great rock guitarists of the last forty years, is living in genteel squalor and stone cold broke. And hasn't seen any royalties since 1981. 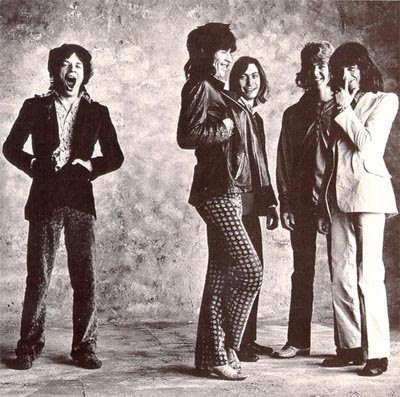 ‘By 1974, I felt I’d gone as far as I could with the band. I didn’t think they’d stay together. Mick and Keith weren’t talking or working together and it was taking longer and longer to make the albums. So as well as Keith’s addiction there was Mick’s frustration and my own disenchantment and disillusionment with them.’

'We used to fight and argue all the time. And one of the things I got angry about was that Mick had promised to give me some credit for some of the songs – and he didn’t.

‘I believed I’d contributed enough. Let’s put it this way – without my contribution those songs would not have existed. There’s not many but enough, things like "Sway" and "Moonlight Mile" on Sticky Fingers and a couple of others."

Sorry the Daily Mail link is down, but the bottom line is if you read the story, it's obvious that Taylor indeed got the shaft. But on the other hand, as he famously observed a few years ago -- he IS the only guy to have quit the Rolling Stones and lived.

In any case, I love Taylor's style. Here's a track featuring him you might not have heard -- a brilliant live version of "Bye Bye Johnny" from the Stones' 1972 show at Madison Square Garden.

Keith, of course, is playing the brilliant but traditional Chuck Berry riffs you hear on the right channel. What Taylor is playing as counterpoint on the left, however, is on another level altogether.
Posted by steve simels at 12:01 AM

They were never quite the same live after Mick Taylor left.

The Stones at MSG in '72 were the best that's ever been. Remember having to get tix via a lottery?

I was going to bring up Bill Wyman as well, but Noam beat me to the punch. There is also a story floating around on an Australian website saying that Charlie Watts is quitting, or indeed, may have already quit the Stones. (www.undercover.com.au is the website). A Stones rep is denying this repoet.

As for Taylor, if it's been since 1982 that he hasn't been paid what's owed to him: 1) Where has he and/or his lawyers been? and 2) How much of a case after this long does he have. The two tracks he mentions I don't believe Keith even plays on--Moonlight Mile, for sure. "Time Waits For No One" (maybe his best guitar with the Stones, IMHO) would almost certainly have to be another.

The track from MSG is incredible, by the way. Much of the live Stones from this era is played way too fast for my taste, but they're on here for sure.

The Taylor stuff on those Stones albums is some of the most gorgeous rock and roll guitar I've ever heard.

One would think that he could get a gig pretty easily if he wanted one.
Kind of late to cry about songwriting royalties.

That entire bootleg is incredible! Thanks for alerting me, sir.

As for Taylor, the trajectory of his career has always been a mystery to me, as he is one of the tastiest guitarists around. He could have had any gig he wanted after leaving the Stones, but instead he settled on playing Saturday nights in some bar in Jersey, if memory serves me right. I'm guessing he needed to dry out for a few decades.

Sorry to go off-topic, but you guys HAVE to read this:

Didn't Matthew Fisher only recently obtain a UK court's judgment giving him a writing credit on Whiter Shade of Pale, an older piece of music than anything to which Mick Taylorcontributed? Maybe Taylor could get a sympathetic solicitor to work on spec.

Odd how some guys with incredible talent fuck up their careers ... Terry Reid comes to mind ...

And I agree that the Stones live shows were played way too fast for my taste back then. Must have been all the blow.

This story is now disputed by Taylor's manager:

According to manager Jeff Allen, Taylor felt "shock, horror and disbelief" reading a recent article in the Mail on Sunday. The piece depicted Taylor as full of regrets and vitriol, living in a "ramshackle cottage" in Suffolk. Despite playing on albums such as Sticky Fingers and Exile on Main St, Taylor had allegedly been denied royalties since 1982. "Hiring a lawyer is probably the only way they'll take me seriously," he was quoted as saying.

But that's simply not true, Allen told the NME yesterday. "He certainly didn't say that he was going to sue the Stones," Allen said. "He doesn't feel any need to sue ... Mick's got a very good relationship with the Stones."

Anyway, great track and though Taylor has not had the most auspicious solo career, his playing is usually solid, concise, and fun to hear. Cheers