There'll Always Be an England

To be honest, I still don't quite know what to make of this. Seriously -- when I chanced upon the following All-Music blurb about a 60s band called Dead Sea Fruit -- not to mention that album cover, with the faux Hebrew lettering -- I thought, nah; this has to be some kind of parody or hoax.

Combining the deadpan wit of the Bonzo Dog Band and the social-conscious lyricism of the Kinks, Dead Sea Fruit helped to bring the British Invasion of the 1960s to France. Formed in 1966, the group spent three years based in Paris thrilling French audiences with their hook-laden songs. Although all but two members relocated to Dakar, Senegal, electric bassist/guitarist/vocalist Arthur Marsh, who had replaced founding member Christopher Hall in early 1967, returned to England after three months when club owners demanded that they stick to cover tunes. Dead Sea Fruit reached their apex in 1967, when their tongue-in-jowl single, "Lulu, Put Another Record On," reached the top position on the British music charts. Their self-titled album was released the same year. 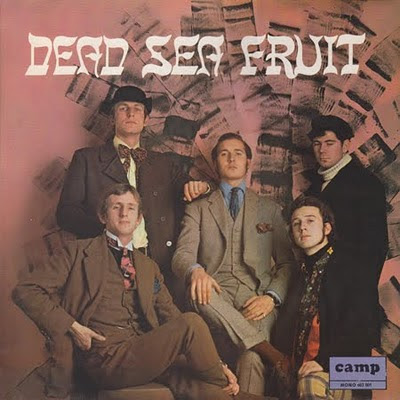 Of course, I said the same thing when I chanced across the All-Music blurb for The Monks back in the early 90s. Heh. In any case, I just can't figure how I never heard of an actual Brit band that actually had a Number One record during the actual Summer of Love, but it turns out the DSF really were for real. Here's the aforementioned hit "Lulu," a borderline annoying old-timey vaudeville pastiche which has nevertheless been burrowing its way into my cerebellum since I first downloaded it on Friday.

In case you're wondering from whence the band name derives, it's from The Fire Worshippers, a fairly obscure poem by Thomas Moore, a 19th century Irish writer who is apparently best remembered as a pal of Lord Byron; the complete quote is "Like Dead Sea fruit that tempt the eye, but turn to ashes on the lips." I learned this, and you can learn a bit more, from the band's official website (and frankly, I'm amazed that there is, in fact, an official Dead Sea Fruit website).

And here's another album cut (also the b-side of "Lulu") that I rather like -- the charmingly period monikered "Kensington High Street."

Hey -- I'm a sucker for any record with an instrumental quote from "Jesu, Joy of Man's Desiring." Not to mention the "hey!"'s from "Five O'Clock World."

And two postscripts: Apparently, the British indie Camp Records, which was home to the Fruit, had nothing to do with the explicitly gay-themed American underground label of the same era. A little Googling also revealed that although the Fruit's album was never released in the states, the "Lulu" single was actually available here on Atco. It thus has something in common with the Who's epochal "Substitute." also released in the states on Atco during that rather remarkable summer of 1967.
Posted by steve simels at 12:04 AM

Senegal? I can buy Paris, just barely, and an English #1 I've never heard of, barely just. But Senegal?

I like Kensington High Street, which kind of combines Donovan's Sunny South Kensington and Joni Mitchells Sunny Goodge Street. I have to wonder about all those what-we-thought-were 1920s pastiche songs from that era (Winchester Cathedral, Moby Grape's Just Like Gene Autrey, this Lulu, and all the songs with tromboney and rinkey-tink piano arrangements). Now that I have a pretty broad familiarity with popular music of the 1920s and 30s, I can pretty confidently say that these songs bear no resemblance whatsoever to the actual music of that era - which pretty cool. I wonder what was going through our heads?

I know what you mean about Senegal. When I read that I immediately thought -- put on. Made up -- has to be.

"Apparently, the British indie Camp Records, which was home to the Fruit, had nothing to do with the explicitly gay-themed American underground label of the same era."

No, it's absolutely real. These guys really existed; I found a website somewhere where their kids are just pleased as punch that this stuff is online.

And a discography for the British Camp Records which released a bunch of rock stuff besides this.

I thought I'd heard of all the popular British novelty acts of the time, but I have to say that until 10 minutes ago I had no idea they existed.