I Will Never Be Through with The Bangles 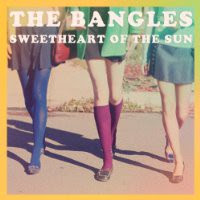 And no one's more surprised about that than me.

The Bangles have a new record, which drops today. You can get it at all the usual places, plus there's a single streaming at MTV's Hive. Recorded with Matthew Sweet, Sweetheart of the Sun is supposed to be a return to the folkier Bangles, leaving aside their foray into mainstream pop in the mid-80s.

While Sweetheart finds the group covering two Nuggets-era garage rock tracks, lead single “I Will Never Be Through With You” recalls the delicate melodies of the Byrds and Big Star. They may always be known to some as “that Egyptian band,” but Sweetheart is a sound attempt at breaking out of that fossilized shell of their former selves.

It's a beautiful song, and I'm quite taken with it.

I ignored the Bangles for a little while: though I was never much of a hipster, and I adored "Hero Takes a Fall," I was in college during the Egyptian phase and the Eternal Flameout, and so had that college student disdain for all things popular. I hope they made a gazillion dollars, though. It took a while for me to get back to them: by the time I was done with grad school, Susanna Hoffs was doing stuff with Matthew Sweet and I had gotten over my cool snit.

It's nice to see them recording again.
Posted by NYMary at 2:25 PM

I saw them for the first tine on AMERICAN BANDSTAND, if you can believe. I think doing "Hero Takes a Fall."

I was instant fan, and have remained one despite"Eternal Flame."

This record is truly wonderful news....

Aw man I love 'em so much. Thanks for bringing this to my attention. It's a great song. They are so much better after 30 years than they have any right to be. Their last album, Doll Revolution, was as good as anything they've ever done. And somehow, they don't get even as much respect in power pop circles as say, the Knack. Why is that?

Count me in! My fanboy status goes back to their initial Bangles EP and full length LP All Over the Place. What came after was unfortunately foisted on them by the record company. But those first two releases were the real deal and I still listen to them on a regular basis. I swoon over every track. More Than Meets The Eye on AOTP is one super fine piece of baroque pop. Ms. Hoffs was not the only fine singer in the group.

Based on the song here, I am definitely looking forward to hearing the new release.

I saw them play live this Summer. Nothing from the EP or the Bangs days (whoops... showing my Paisley UG roots), but they did play 'Hero', and 'Liverpool', and 'Live'(!) from All Over the Place. They sounded better than ever, and actually got my 9 year-old to like 'Pushin' Too Hard', so that was something.

This sounds great. I always had a thing for The Bangles in my youth. They have somehow gotten even better looking over the years.

THANK YOU - NYMary for pointing this out - I had totally missed that the Bangles had a new album. And this song (at least) sounds wonderful! Off to one of the 'usual places' to discover more...