From sometime between October 31 and November 22 of 1966, here's Grace Slick of Jefferson Airplane, in RCA's cavernous Music Center studio in Hollywood, with the original unaccompanied vocal track to "White Rabbit."

The sound doesn't actually start until about the 30 second mark, i.e., at the end of what would be the instrumental intro if you could hear it. So be patient -- it's worth it. 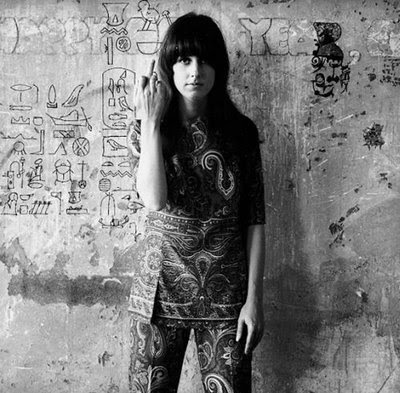 I was originally going to title this post "Monday Moment of Creepy," but I thought better of it.

I should also add that the more I ponder Jefferson Airplane of late, the more it occurs to me they had far more in common with the punks that followed them then they've been given credit for.
Posted by steve simels at 12:47 AM

The one and only Gracie.

I had an outfit like that, except I made mine out of an Indian bedspread and I don't think I ever ironed it ... :-)

I always thought Jim Carrey's karaoke scene in The Cable Guy doing Somebody To Love was a hoot.

And here are the Ramones, making the connection obvious:

Yoko set the standard for creepy vocals. This is nowhere near it.