(Friday) Advertisements for Myself

Hey -- remember that Procol Harum biography I raved about a few weeks ago? 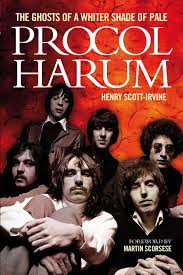 Well, somehow, in the first read, I missed the fact that I am, in fact, quoted in it, by name. (From a review of Procol's Exotic Birds and Fruits album, which I hadn't listened to in a long while, and which holds up, to my delight, quite splendidly).

On page 150, for those of you playing the home game.

For some reason, however, my moniker does not appear in the index.

This is an injustice that should not stand, and I plan to send a sternly worded message to its author, my Facebook chum Henry Scott-Irvine.

In any case, coincidentally, I just discovered this amazing Procol clip on YouTube.

"Power Failure," live on German TV in 1976. With an astounding drum solo by the late great B.J. Wilson.

Wilson was the only rock drummer who ever did a solo in concert that didn't reduce me to scowling fidgets; this one goes on a little longer than usual for the guy, but it's still more or less, as Brooker says in his intro, inimitable. The octopus in the bathtub, indeed.

Low drum stool. Makes my back hurt looking at it. But sounds great. Great powerpop bands start with great drummers.

The solo is great! Better than a lot of jazzers, let alone rockers!

But what about that insane cowbell work during the body of the song?! How do you do that unless you're a low-riding wizard?

I wonder if, like so many drummers, B.J. was seeing a chiropractor.

The octopus in the bathtub is a beautiful image and description. I can totally relate to that.

Once, when on a sleepover at my friend Sandy's house, we took some mushrooms and ended up in the bath together. She was playing the trippy side of the Chicago Transit Authority album.

When their cover of "I'm a Man," hit the percussive middle section, we were peaking. We beat and splashed the water with the most happy abandon imaginable. It was a complete and indelible return to childhood innocence and joy. So "octopus in the bath tub" really connects with me.

Danny Seraphine was pretty good, but he was no B.J. Wilson. And we all know about Chicago.

I always thought Jimmy Gordon was a monster rock 'n' roll drummer too. At least until he started hearing the voices.

I don't have the book yet, but wouldn't consider it a spoiler if someone would tell me what drugs were involved when B.J. wound up in a vegetative coma. I know alcohol had to have been in play. But what else?

Also how did he end up in Eugene, Oregon?

Hope you get your attribution issues straightened out Steve. Good luck.

I took a pee next to Wilson at the press party for "Grand Hotel."

At the Waldorf, if memory serves. We exchanged inebriated pleasantries, and he seemed like nice unpretentious folk.

Now that's what I call rubbing shoulders with greatness.

BTW Exotic Birds was the last decent album for them IMO.

They should have never done the reunion thing.

Drum stool too low, can't watch. Too much cowbell.

buzzbabyjesus: I agree on the cowbell. It is excessive. That's why I brought it up. It's a question of technique over taste. Less is usually more. In this case BJ really goes into a mad-cowbell frenzy. But I still can't figure out how he does it.

Reminds me of how Ian Paice ruined Deep Purple's "Anthem" with constant and unnecessary fills.

BJ and Gary look like the only original members. Who are those other guys? The whole thing smells like it's out of gas to me.

Yeah, that was near the end. But the second guitarist is Chris Copping, who came in 1970' and had been in the Paramounts with BJ Gary and Robin before Procul.

Love the traditional grip, but agree the drum throne is too low - I couldn't play like that, it would tire me out too soon! Of course, now I'm a 62 year old drummer and in '76 I would have been 25, so - I probably could have handled it...

https://www.youtube.com/watch?v=htyVq1yCgyE links to a video that is actually in-synch. Much better to appreciate his talent.