Slip Into Your Saturday Shoes

Whelp, here we are again. I realized that I never got back to blog about the second night of the Brooklyn Power Pop Festival which was INCREDIBLY FUCKING WONDERFUL, but such is the life of the busy. They shouldn't have held it the week before classes end, is my point. But Brooklyn Vegan (one of the best NY music sites out there) gave a report and got some pix. (That's my arm there behind the merch table.  Try not to get too excited.)

Collins was terrific as always: his years on the road really show in his tight, expert performance. I got to catch up with him a little as well: good guy.

And Shoes were, well, Shoes.  They played a scorching 97 minutes (I know this because someone sent me a complete set list with times: I myself was not counting the time at all) from all through their career, including a delightful (and unexpected!) Black Vinyl Shoes medley. ("Boys Don't Lie," "Do You Wanna Get Lucky?" "She'll Disappear") 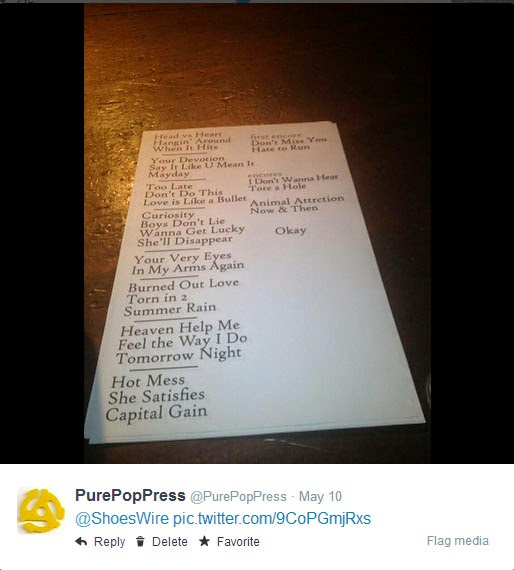 And the crowd was electric. I've only seem them live once before, and it was kind of like this: they're so legendary and private that people have a hard time believing they're really there. And apparently, that's always been true: Chris Morris wrote something quite similar 24 years ago: "The audience reacted with disbelief, then pure glee."

So here I sit, eating hotel breakfast in Valparaiso, Indiana, waiting for them to play again tonight. (Why do not all hotels have waffle makers?  They make travelling worthwhile!) Why did I drive ten hours to do this? Well,I have books to sell, but there's more to it than that. There's this.

Oh, I will be live-tweeting at PurePopPress.

They were truly awesome in Brooklyn. And you're right--part of it is just that you can't believe they're actually real.

Stop softening my hardened heart! I have a sweet tooth. And there's a dump truck full of sugar here.

But damn, it's still kind of wooden and studied, in this girl's opinion.

These guys don't do any cover tunes?

Too bad that Summer Rain on the setlist isn't the James Hendricks / Johnny Rivers thing. But I don't think that kind of stuff is in the Shoes wheelhouse.

Regardless of my skeptisism, enjoy swingin' Valparaiso. Next time remember to BYOWM. You might want to pay a visit to the works of Georgia O'Keefe and others at the Brauer Museum of Art.

Uh, I meant "skepticism". My fingers betray me often. Thus my alter ego, Fudley Correctol, surfaces now and then.

Getting my two yanks in England, followed by more than a mouthful of Barry Ryan. Mmmmmm .... so delicious. And a subsequent double header with Paul added to the mix. Ever heard Glad To Know You? Come join me and play Reincarnation Games. Kitsch IS a beautiful word. Taste and try before you buy,

In a righteous world, Shoes would be having the success of Coldplay.

Trying to think of the other band that did a song titled 'Hot Mess'. It's fairly recent I believe.

Barndog: It's Cobra Starship featuring Peter Asher's silver-spooned daughter and fronted by Gabe Saporta. They had a big hit with a song by that title. My daughter was fourteen when it came out and I had to endure it.

At least you can dance to it.

Was it really necessary for you to come over here and piss all over Mary? Do you realize that a) she started this blog and b) she wrote the definitive book on Shoes and that they mean a lot to her?

Brooklyn Girl: Apparently something was lost in translation. I was trying to express that my negative feelings about the Shoes were softening.

Head vs. Heart is a great song. And it's done like a sweet confection. I just think the vocals like a certain passion. That's all.

That happens in the studio sometimes. Maybe in a live setting it has more guts. And besides, it just my opinion. I don't mean to be hurtful with it.

My comment was meant to be friendly, not insulting. Neither to the band nor Mary. I was just trying to say that I was beginning to see the light.

Apologies if it comes off differently. I certainly don't want any trouble.

Vickie Rock anticipating a great show from Rickie Lee Jones tonight. And good old Alfred Johnson. What an apt last name for him.

BTW, Glad to Know You!

I am living vicariously thru you right now. I haven't the funds to chase Shoes at this moment but had the privilege of seeing them live a few decades ago. They played Champaign, IL several times and I made the trek to The Cubby Bear for them once. I clearly remember pouncing on the band leaving one Champsign show only to find out they had awful colds and sore throats. I thought they sounded awesome anyway. Please enjoy!

I just now figured out there was a link to Brooklyn Vegan. Thanks so much for posting that!!! Great photos! And even setlists for the headliners!! Can’t beat that!!! I’d been waiting for something like this. Hope your weekend in Skindiana worked out well.

Collins is heading my way next week and I'm looking forward to it.