"I was never that big a Henry Rollins fan, until now."

And you could do a lot worse than follow in Wolcott's footsteps. 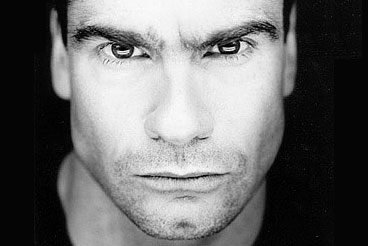 I do like Rollins, though I worry vaguely about his necklessness. More to the point, we live in a world where reading a book in a place you can be seen which suggests that you're trying to understand a culture clash that determines much of the economic and political activity of the globe is somehow now seen as dangerous. Anyone who hopes to do anything except wipe out a billion people is now actively subversive.

Rollins, like Jello Biafra, has been one of those musicians who has generally taken his public role as an artist pretty seriously. But this is, not to put too fine point on it, fucked up.

Wonder who turned him in?
Posted by NYMary at 6:23 AM

Of course he's a threat ... to everybody who can't think for themselves!

Doubleplusungood thoughtcrime, Mr. Rollins. Wrongthink will not be tolerated.

Unreal, or at least I wish it were.

Shall we remain in our seats until the Earth comes to a complete stop?