OT: My Next Project

Doug, a commenter at Eschaton linked to this fantabulous site, which I find really fascinating, for some reason. Maybe I need to build one. 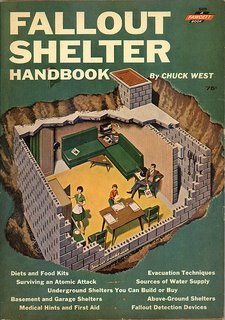 I found this musty handbook from 1962 in a pile of similarly musty magazines and articles in a booth at the Inman Park Arts Festival several years back. The illustrated cover was what initially caught my eye but then I glanced at the large bold lettering at the top and I immediately put it in my "to buy" pile. The cover is classic: your average white American family enjoying life as best as they can after an atomic attack. What I love the most about it is that Mom is in her day dress, apron and all, preparing dinner, and Dad is relaxing in his jacket, smoking a pipe, having just finished reading the liner notes to something by the Ray Coniff Singers, probably. I didn't even take a gander at what was inside until later at home. Most of what you'll find in the handbook is pretty standard construction "how-to's" -- it could've been sold at a Home Depot if they had them back then. In the table of contents you'll find chapter headings with titles like: "How You Can Survive a Nuclear War", "Build a Shelter Now", "Stock Up Now", "Have a Plan of Action Now", "While You Are in Shelter", "Evacuation", etc. This one was interesting: "Guerrilla Warfare", with the tagline, "It'll be done by the people who survive with equipment that survives." The chapter is filled with then-impressive photos of military weapons and vehicles: jets, tanks, missiles, and the like.

I especially liked this picture, which Ward calls "The Loneliest Man in the World," opining that, "Me thinks this was wishful thinking on his part for installing three beds, don't you agree?" 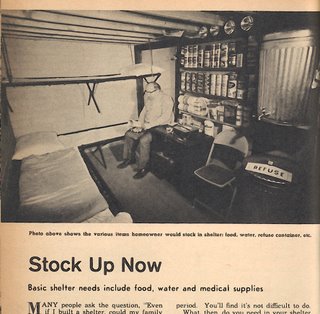 This is how I picture Thers's Uncle Dave, who was supposed to have gold hidden in his Flushing electronics shop, but really just had old canned food and broken electronics, stored against the day when Michael Richards' Favorite Minority were supposed to come marching up Northern Boulevard and target such shops for attack. He also had many, many publications from the John Birch Society, which probably won't surprise you at all.

I hope Spike sees this; it's just his sort of thing.

And a thematic video!

Thanksgiving used to be a LOT more exciting than it is now.

Living at the edge of Los Angeles county, my mother would talk about what we would do if Los Angeles was bombed. Tents in the yard for refugees, storing cans of food in the interior hallway where we could bunker if the outer walls of our house was destroyed, mattresses against the windows.... We had no concept yet of what radiation would do.

We also had air raid sirens on poles about the city and they would test them every so often. Hiding under our desks at school had nothing to do about earthquakes and everything to do with the Russians attacking.

A neighbor of ours had a construction company build an actual bomb shelter and tried for a while to insist the hole in the ground was for a swimming pool. She had to stop that when the ground recovered the area. Her family obviously felt when the bombs fell, they would be battling the frantic neighbors wanting to share their underground shelter as well as the marauding Russians. I think they had guns.

The ugliness of the age has faded but I hope we have learned something from that era. I hope....

>This is how I picture Thers's Uncle Dave<

Actually I think he was looking forward to the solitude. If I remember correctly, Thers and I were the only folks he was willing to save from the impending doom.