The short version: I just did a liner note gig for the reissue of an album by an old friend of mine from my 80s rock-n-roll days in the Village. (The album originally came out in the early 70s). The CD version is being released by Light in the Attic, the same fine folks who brought you the Rodriguez reissues.

In any case, there's a brand new video for the album's first track below. 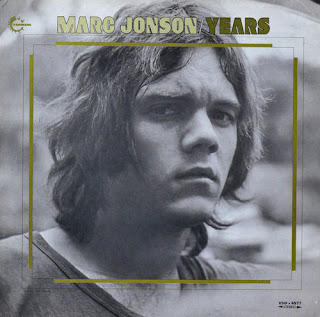 Let's make one thing perfectly clear right from the start -- there are cult albums, there are Cult Albums, and then there's Marc Jonson's 1972 Vanguard LP Years.

I mean, if you're a power pop aficionado, you may be aware of the songs Jonson gave to other more celebrated recording artists (The Roches, Dave Edmunds), and you are almost certainly aware of his power pop masterpiece 12 in a Room (from 2000) -- still available over at Amazon, and if you don't already own it get over there and purchase it pronto. But otherwise, unless you're either one of Marc's personal friends or one of the handful of folks who stumbled across a vinyl rip of Years from an illegal download site sometime in the current century, then chances are the CD you are now holding in your hands is going to feel like it just bopped in from an alternate universe.

And therein, as you might suspect, lies a tale...

To read the rest of them -- and hear some other very interesting songs -- you'll have to buy the CD, which I believe will be unleashed sometime later this year.
Posted by steve simels at 9:26 AM

Still my proudest music-related accomplishment: connecting Marc with NotLame in order to get the ball rolling for the "!2 in a Room" reissue. Even got my name in the liner notes. The funny thing is, I talked to Marc on the phone about buying a copy of the original CD from him -- he didn't have any extras -- but he mentioned that he'd love to reissue it and that's what got things rolling. For somebody in no way involved with the music industry, it was a kick.

I will definitely order this disk when it comes out.

And if you haven't heard Marc's "Love Me, Love Me Not," you're missing one of the all-time great power pop songs.

Marc Johnson - "Love Me Or Love Me Not"

Mark has a Wild Alligators comp out. It's beyond gorgeous....

Steve - Why does Mark spell his name differently on every album? Is it Mark Johnson, Marc Johnson, or Marc Jonson?

Steve- Mark does a great version of "Love Radiates Around" on "The Greenwich Village Folk Festival 1989-1990" album that I can't find anywhere. Could you post that version if you have it? Thanks!