Wails From the Crypt (An Occasional Series): Tonio K.

[I've been meaning to post this for ages, but better late than never. From the April 1979 issue of The Magazine Formerly Known as Stereo Review, here's the most semi-legendary album review I ever wrote. I'll explain that statement and more when you've finished with the piece, so please read on.] 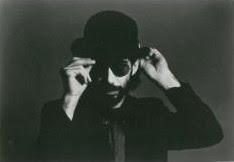 Ladies and gentlemen -- I give you....the greatest album ever recorded!

I can hear you already -- nitpickers, musicologists, the small-minded, owners of Book of Lists toilet paper. What, you cry, of Dennis Brain playing the Mozart horn concertos? What of Miles Davis' Sketches of Spain, B. B. King's Live at the Regal, Bruno Walter's Mahler Fourth, Sgt. Pepper and John Coltrane's A Love Supreme? Not to mention Nervous Norvus' "Transfusion," John Wayne's "America: Why I Love Her," and the Singing Dogs' "Jingle Bells."

Oh, all right. So I lied. But, honestly, it's the kind of lie that Life in the Foodchain inspires even in as responsible a critic as me. Its creator, Tonio K., is easily twice as angry as Elvis Costello and about six times funnier, and though he spent this decade's middle years in a Southern California booby hatch, rest assured that his songs sound nothing like James Taylor's. What they sound like, actually, is Loudon Wainwright if he'd O.D.'d on the absurdity of American life and then been drafted as the lead singer for Led Zeppelin. Beyond that, it's hard to describe the songs because to do so, or to quote the lyrics, would be like giving away the one-liners in a Woody Allen film.

Let me simply say, then, that Tonio K. thinks that humor is a serious business and that the next big dance craze will be "The Funky Western Civilization." Let me also say that he is the only rocker in memory whose album contains a cameo vocal appearance by Joan of Arc, that his music is bone-crushing rock-and-roll as manic as any punk band's but infinitely more sophisticated, and that his lyrics are so absurdly literate and corrosively cynical that they have reduced me to rolling on the floor from the mere reading of them. To hear them declaimed by Tonio in his marvelously twisted voice while the band conducts an aural demolition derby behind him is the most exciting experience I expect to have in my living room for the remainder of this year.

The bottom line? Tonio K., if not the future, is certainly at least the George Metesky of rock-and-roll. As a matter of fact, I think I'll have to take back my earlier disclaimer: this IS the greatest album ever recorded. -- Steve Simels


Okay, for starters, I should add that three months after the review appeared, we ran the following Letter to the Editor from the man himself.

Has Simels gone mad? "Life in the Foodchain." while certainly a good, great, maybe even swell album, can't possibly be the greatest album ever recorded. James Brown Live at the Apollo is. This can be substantiated with actual documentation. so don't argue with me. And what about the Seeds' first album? And is the cat still in the freezer?

I should also add that while, as you may know, I am not cool enough to have my own Wikpedia entry, I am referenced at Tonio's, specifically in regard to his second record.

K.’s follow-up album, Amerika (Cars, Guitars and Teenage Violence), was released in 1980 by Full Moon (this time via Clive Davis’s Arista Records). Filled with literary and political references, the album was hailed as “Punk for academics” and once again pronounced by Simels to be “the greatest record ever recorded” (as was every ensuing Tonio K. disc) [emphasis mine].

And I'd obviously be remiss if I didn't post an audio clip, so here -- courtesy of an mp3 graciously supplied by Tonio himself -- is my personal favorite song from Foodchain, the immortal "H-A-T-R-E-D." In case you're wondering, among the sounds you'll hear at the song's conclusion are an AK-47 firing live ammunition into an accordion played by Garth Hudson of the The Band. To our knowledge, this marks the first occasion such a feat was ever attempted on a pop or rock record. 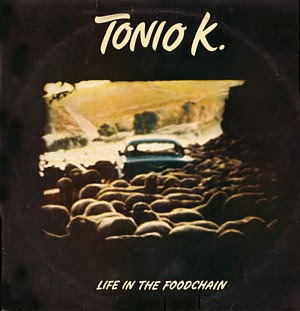 Two remaining notes: Over the last few months since I've been posting audio, I've not really worried about copyright questions and pesky little moral issues like that. This time, since I actually sort of know Tonio, I'm feeling a little queasy about putting that clip up for free, so let me try to assuage my guilt by giving you the Amazon link to go buy Foodchain, which obviously no home should be without.

You can find it over HERE, and, equally obviously, unless you're a complete schween you will order it immediately.

I'd also like to add that last year Tonio put together one of the coolest single CD blues samplers ever. I wrote about it in these precincts back in September; you can read the piece HERE, as well as find another Amazon link to the CD. Plus: there's a YouTube clip of the aforementioned "Funky Western Civilization," my second favorite track from Foodchain.
Posted by steve simels at 12:02 AM

I read that review of Foodchain in spring '79, about a week after I saw another positive review in - wait for it - People. I found the record a couple of weeks later at the little record store next to the little teacher's college in my small town (no, not the one that John Mellencamp sang about), took it home, put it on the turntable, and the rest was history. I played "H.A.T.R.E.D." and "The Funky Western Civilization" at a high school dance later that year just to wig out the dorks (it was highly successful). Me and my mates had this record on our car stereos all year, along with Zevon's Excitable Boy and the Who's Who's Next which I had just discovered - teenage wasteland indeed! Thanks for introducing me to one of the best singer-songwriters of the last 30 years.

Thanks for reprinting that, Steve.

Steve, you are THE MAN. This song rocks. I've got the sound cranked up to 11 and I've been playing it over and over again. For some reason the Misses does not share my enthusiasm. Perhaps its due to the fact I keep expressing "the resentment I feel for the years I pissed away on you" at the top of my lungs. Oh well.

HATRED is my favorite song from the record as well. I still have my original, it only has a couple of tics and pops on it.

He kind of reminds me of some of the early Tubes mentality. I mean that as a compliment.

My vinyl promo copy was in clear green plastic.

I've had the tune in my head all weekend.

I do remember this review, but it kind of went over my head--(at the time, I still thought Aerosmith's Rocks was the greatest LP ever made) but it's nice to see it again. Bonus points for the use of "schween," one of my favorite epithets and a rarity in the blogosphere and elsewhere. I've used it for a long time, but I probably picked it up from mid-'70s National Lampoon.

Great song and one that I can attest, as a former FCC-conscious college radio deejay, is quite difficult to live-dub into playability. (They still have the vinyl!)

To this day, my all-time fave record review. I was probably the only kid in my small, Pennsylvania hometown to own this record, but I searched for it zealously after reading this review. Been loving the album for 30 years now and I'm forever grateful to Steve.

And, David, you can love both "Rocks" and "Foodchain." They're both great albums in their respective ways. I know I love them both and doing so harms neither limb nor psyche.

And, David, you can love both "Rocks" and "Foodchain." They're both great albums in their respective ways.

The first 4 Aerosmith albums are excellent and hold up well. Even "Draw the Line" sounds good after all these years.

Who would've guessed the Power Pop blog would have a contingent of secret Aerosmith fans? They may not have been as deep or edgy as Tonio K, but yeah, those first four (or five) still sound great. (The streak ended at Night in the Ruts, although the title still gives me a chuckle.) They got little critical respect, but Christgau gave Rocks an A-. My first concert ever was Aerosmith/Ted Nugent at the Garden, and it blew my teenage mind. Tomorrow we can discuss Wishbone Ash.

You know, I hate to say it, but I think the post rehab Aerosmith rules.

Seriously -- the 70s band couldn't have made a record as good as "Janey's Got a Gun."

"Janey" and the subsequent stuff just too polished for me. The production on "Rocks" still had aa certain unruliness that fit the band more than that David Foster-esque approach.

I remember the Tonio K record showing up at the radio station at my backwater college that year, always played it on my DJ shift. I'd never heard anything like it, and I guess I still haven't.

Mr K. . . so many memories. If you listen really hard and turn the volume way up and stick your ear right on the speaker, is there a 12 string Ric right around the Louie Louie car horn?
Got turned on to the Gadfly releases, including Rodent Weekend, which has a lot of his songs from the live act during the Foodchain era, where you rarely heard released songs. It doesn't have my favorite ode to the apocalypse that never happened "Hard to be a hero at ground zero" . Maybe someday. . .
By the way, I feel that Tonio, like Nancy Kerrigan, was ROBBED. He shoulda had top billed listamania mentions of his album covers, including La Bomba and Ole. I mean, cmon, already.

Steve, don't you think "Jaded" was as close to power pop as Aerosmith is ever going to get?