Okay, this one's freaking me out, mostly because I had no idea.

Remember Millie Small's 1964 Brit Invasion hit "My Boy Lollipop"? The record that, in retrospect, turned out to be the first exposure any of us State-side had to the pre-reggae Jamaican music called ska? And, coincidentally, the song that put Island Records honcho Chris Blackwell on the map? 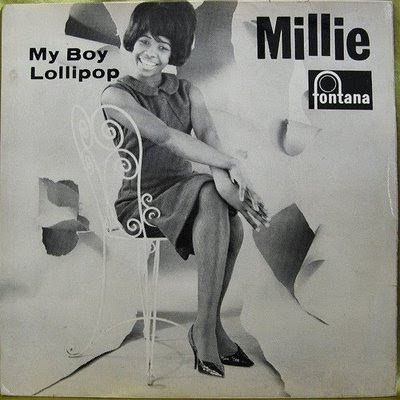 Well, turns out it's a cover of an obscure 1956 r&b hit by Barbie Gaye (no relation to Marvin) 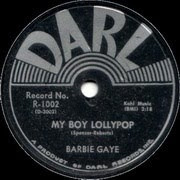 I think in this case the cover is clearly better -- it's better sung and much poppier (the horns are an added hook) and, well, just better.

Incidentally, if you're wondering why the hole in the Barbie Gaye label is so small, that's because it's a 78 rpm record. Back in 1956, you could still buy pop singles in two formats, i.e. either easily breakable ten-inch 78 or the more familiar seven-inch 45.
Posted by steve simels at 12:00 AM

Great series of discoveries, I never heard the original.

Was the original ever a hit?

Heheh! Joy on both counts! I agree, Steve, the Millie Small is a more infectious outing. She's a bit like a cross between 7-year-old Michael Jackson and one of the Chipmunks. Chirp, chirp!

I like the Barbie Gaye, too! Just not as poppy a record.
Thanks!!
PK

The Barbie Gaye was a minor New York hit.

Apparently the infamous Morris Levy had his fingers in it, although the song was actually written by one of the Cadillacs. Alan Freed is involved in the story at some point as well..

Crikey, Wiki says Barbie Gaye was 15 when she recorded that! Pretty impressive vocal abilities for a 15-year-old.