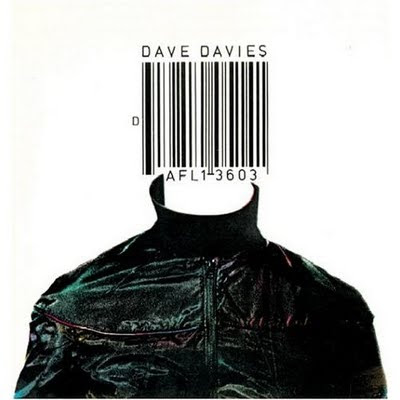 I know I had the LP version of this, and in fact I'm almost positive that I reviewed it for The Magazine Formerly Known as Stereo Review. On the other hand, I have absolutely no recollection of what I said about it -- although given my unfamiliarity with the record since, I suspect I thought it wasn't as clever as its cover art. In any event, having chanced across a digital version recently, I'm frankly very pleasantly surprised by how nice the album mostly is.

As you can hear, it's not remotely in what you might have thought was Dave's style (he plays and sings every note on the album, BTW), and the production is extremely bare bones (apparently deliberately). That said, I absolutely lurve the guitars on this one, and there's really something quite interesting and haunting about the whole thing.

[h/t Willard's Wormholes]
Posted by steve simels at 8:35 AM

The fadeout gives me chills in a good way.

Word verification: Fiskyll. Pretty sure I've driven through there.

Sorry, if I didn't know it was Dave Davies, I would dismiss it as an utterly forgettable piece of 80s guitar-pop.

I dunno -- to my ears its got a certain je ne sais quoi that truly says I don't know what.

Hmmm, appears I have the single and may have only listened to it once in 30 years. I'll have to see what the non-album b-side sounds like. As for the A side, it's sort of a nice try, but no cigar.

A voice designed by that great genetic engineer in the sky to harmonize perfectly with Ray Davies', but not to venture out on its own. Okay song, though.

I had that album, too, and I don't remember a thing about it, either...

I had this album for a day before I returned it. It sounds so ugly.

Late to this party, but let me say I fall somewhere in the middle on this.

The opening of the song provides a very strong hook but I don't think the rest of the song delivers. The guitar work is interesting and even fun, but the haunted-house vocal undermines, for me, the energy of the song.

IMHO, the best power pop is passionate. This is the opposite of that.

Still, I like the tune. Just don't love it.

Following up. I listened to the b-side "Wild Man." I sounds like Jimmy Page auditioning for Rockpile on speed.

I always liked this album... and loved this song.

Maybe because of what was happening in my so-called romantic life at the time, this song can instantly send me back to a very specific place and time -- for both better and worse.