The Day the Earth Stood Still

Floor Your Love, the album my early 80s skinny tie band The Floor Models would have made had somebody been nuts enough to sign us back in the day, is now available for digital download at Amazon. And iTunes (momentarily).

Compiling this project has been a labor of love on my part going back for almost two years and swear to god, I can barely breathe now that it's come to fruition. 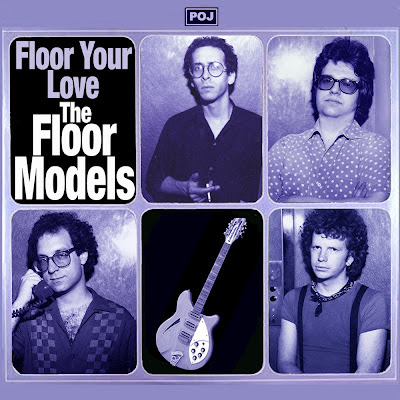 A couple of points before I pass out.

The songs on the album were recorded between 1982-88 under various and sundry circumstances (studio, live, primitive home demos, etc) and there are two covers amongst them -- a blistering club version of The Records' power pop classic "Hearts in Her Eyes" and a semi-live take on ABBA's "S.O.S" that we did at WBAI-FM. I'm prejudiced, obviously, but I think all the stuff holds up rather well.

We're also in the process of pressing 100 actual CD copies of the album (with a back cover, detailed credits and a disc graphic pushing the retro 60s LP shtick even a little further)... 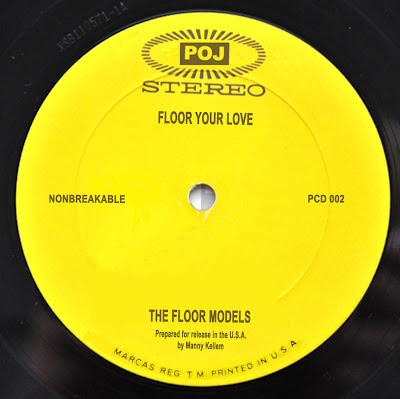 ...and they'll be available, gratis, for friends and press ASAP. Assuming there are more than 100 people crazy enough to want a copy, we'll run off another batch as soon as we can.

Also, you'll note that you can purchase each of the 19 tracks individually. This makes little economic sense, of course, so I suggest you buy the whole thing as a package. Especially given that we're selling it for a lousy $8.99.

Or to paraphrase Chico Marx in A Day at the Races, don't be a crunger for nine bucks.

I would also like to say to my bandmates Gerry Devine, Andy "Folk-Rock" Pasternack and Glen "Bob" Allen: You guys were and are the best, and I look back on our time playing music together as the most fun I've ever had with my clothes on. Plus -- a big shout-out to the beautiful and brilliant Wendy Cohen (for the album art and title concept) and to the irrepressible and debonair Steve Schwartz (for an amazing job of audio restoration on some very dicey old tapes); it is probably worth noting that both of them worked extremely cheap.

Finally, I should add that when I say this is the album we would have made back in the day had somebody been nuts enough to sign us, that's actually an interesting story. Let's just stipulate that I still haven't forgiven Paul Simon for poaching producer/engineer Roy Halee for some crappy project called Graceland at the last minute; get me drunk sometime and I'll tell you the whole sad tale.

I think I'm a'gonna get me one. This is exciting. Mazel!

To paraphrase the immortal Groucho:

From the moment I picked up your CD until I laid it down, I was rocking like a mofo.

Someday I intend listening to it.

would love a copy but will gladly pony up to Amazon for a digi-copy. Looking forward to it and congrats to the Floor Models.

Congrats, finally. I'll take my free copy in place of the dinner you owe me for long past services rendered. I'd say you're getting off cheap, considering what a good meal costs nowadays.

There is already a CD copy reserved with your name on it. As soon as they're ready (I'm thinking two weeks, give or take).

Seriously? Can't wait to hear it!

I see you did give Manny Kellum a name check here...:)

Manny is our secret weapon.
:-)

Finally have a chance to check out the samples at Amazon and I'm amazed at the sound quality you were able to coax out of those old tapes.

Sounds as professional as any commercial release.

Can I get my name on the list for a good old cd copy on POJ records? (POJ??)

Steve, Congratulations. I too would like a good old CD. I am more than happy to lay out the cash necessary.

Congrats Steve! Ever so hooky, and the production quality is actually freakin' great. Can't believe some of those are demos. Anyway, got my digital copy, want the CD. And the greatest gift of all? It's driving my 14 year-old absolutely NUTS... and I can't tell you what sweet revenge that is. Thank you thank you thank you!!

I will download - but - how can we get the album art? Considing the background of at least one of the folk involved, there ought to be some great liner notes.