From 1967, please enjoy -- if at all possible -- The Fifth Estate and their flop follow-up to their hit version of "Ding Dong etc." 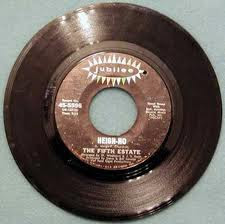 And how did this recording actually happen?

While performing at a Christmas party not long after, Askew reportedly cracked that given the proper production and promotion, any song could become a hit; his bandmates took the bait, and Askew and Wadhams set to work on adapting the Wizard of Oz chestnut "Ding Dong! The Witch Is Dead," basing their arrangement in part on Michael Praetorius' dance suite "Terpsichore." Jubilee Records heard the demo and quickly signed the group, with "Ding Dong!" falling just shy of the Billboard Top Ten in mid-June 1967; the Fifth Estate spent the summer touring as part of a package headlined by Gene Pitney and the Happenings, and in August released the follow-up, the Lovin' Spoonful sound-alike "The Goofin' Song." The record went nowhere, as did the subsequent "Heigh Ho!"

"Even though it was a bad record, it failed to sell."

I hear this and simultaneously envision dozens of Muppets, Dwarves, and Munchkins prancing haphazardly about whilst to stage right Marilyn Manson bathes in a tub of silken undergarments covered in imitation blood and manure and to stage left Trent Reznor nails a stuffed mouse to a crucifix while howling in real angst at the inhumanity of its plight.

Other than that imagery, I'm surprised Don Krischner didn't attempt to pawn this trite off to the Monkees to "show 'em I could!"

This one bites, slurps, and swallows.

this one is pretty weak.