Well, the new Floor Models album has finally arrived, and I am beyond stoked that this project, two years in the making, has finally resulted in a disc. 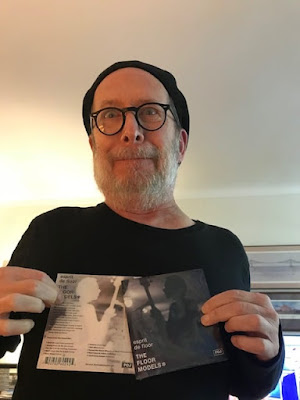 It's especially gratifying because the project originally began as a sort of tribute to our late great 12-string ace Andy Pasternack, who founded the band, came up with the album title, and wrote more great songs than you can shake a stick at.

Here's the one we recorded two years ago to get the album rolling; it was a live favorite of ours back in the day, but for some reason we never even demoed it at the time.

In any event, the physical CDs are wending their way off to our distributor on the morrow, but the album itself can be listened to (for free) over at YouTube.

Or if you wanna be a patron of the arts, you can download/stream it at CD Baby, Amazon, iTunes, Spotify and the rest of the usual suspects.

And I should add that Andy himself gets the last word on the album, via a live solo recording he did on WBAI-FM on a night in the early 80s. It's utterly charming; I like to think of it as our equivalent of "Her Majesty" on Abbey Road.

[cross-posted at FLOOR YOUR LOVE.]