Letters From the Earth

In case you didn't see it, Lou Reed -- seriously(!) -- from the netherworld, responded to my Monday post thusly.

First of all, Stevie boy, you don’t know shit about covers of my work. Or any of my work. All of those "Sweet Jane" covers were for shit, and none so lame as Willie Nile’s. I remember telling Mr. Mott The Hoople he should stick to WW II-era songs like "A Nightingale Sang in Berkeley Square," but did he listen? No! Nobody listens. Fuck ‘em.

Second, cut Laurie some slack, would’ya? She’s the one person who looked at me as an artist, and could she ever cook up a fine mess of corned beef and cabbage! You know, the fatty kind you’d find at the Landmark Tavern on Eleventh. I mean the kind of corned beef you’d get at Katz’s was good, but not like The Landmark. And I absolutely adored her reference to me as a Tai Chi master! Imagine that! Me! A master. She also thought that Metal Machine Music was art. She never listened to it, I mean, how could anyone, but still.

Since I’ve got you here, and I’m not going anywhere, and from what I just heard from Little Richard, you’re not going anywhere soon, let me tell you something. Coronavirus? Big fucking deal! Coronavirus wouldn’t have lasted ten fucking minutes on the Lower East Side in the Sixties! And you shitheads are staying at home? Andy would be pissing in his pants if he heard that! And Cale would’ve have already written three dirges and two symphonies about your coronavirus. He probably already has. I’ll check on him later today.

I don’t have a lot of time left with you, Steve, but there are two things I want you to know. The first is don’t play guitar on carpets in your bare feet. I don’t want to get too Keith Relf about this, but as my Mom used to say, “A word to the wise doesn’t cost you anything,” By the way, we got together Sunday for Mother’s Day. And if I can reconcile with my Mom, anyone can.

The other thing is that of all the Velvets albums, you know which one I liked best? The Doug Yule one, Squeeze. First of all, I had nothing to do with it. Second, give it a listen again. It’ll grow on you in time. And that’s one thing we’ve all got plenty of these days.

Look. I’d love to stay and chat, but I’ve got a video shoot later today with Bowie. We’re going to do a remake of Bowie and Mick’s "Dancing in the Streets," but this time we’re going to do it in Times Square, cause there’s nobody fucking there! 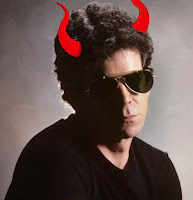 Words fucking fail me. And may I just say, and for the record, but the Doug Yule Squeeze joke just put me on the floor.

True story -- I actually owned that record, and saw that edition of the Velvets at a club on Long Island. Me and Captain Al drove out to see them. Boston rock legend Willie "Loco" Alexander was in the band, and they were actually pretty good.

POSTSCRIPT: Whoever actually wrote that Lou Reed missive -- please e-mail me. And when you're in NYC after our current crisis is over, allow me to buy you a three course meal.
Posted by steve simels at 6:54 AM


Love Wishbone Ash. Argus is one of my favorite albums.

The Cure ain't too shabby, either.

Funny Lou should mention Wishbone Ash, whose latest album, Coat of Arms, was released only recently. The band tours all the time, but not currently of course, and Andy Powell, one great guitarist, is the sole remaining original member.

I agree with Billy B. Argus is one fine album, and Live Dates is a great live album. And how many other bands have been releasing albums continuously since 1970?

But the idea of Lou Reed listening to Wishbone Ash is very funny. I always thought he liked Luna, who opened for the Velvets on their 1990s reunion tour. And oh yeah, The Spin Doctors.

Check this out. Wishbone Ash did a concert on WMC-FM 100 (Memphis) back in the summer of 72. This is where I first heard the band. Phoenix:

That track you pointed to (Phoenix, Live in Memphis) was on a 3-cut album sent to radio stations in 1972 (by either Decca or MCA), and for promotion purposes only, that I came across at my college radio station soon after its release. The three cuts have been incorporated into some reissues of Argus, including one on Madfish, which was released in 2018.

I can understand why dead Lou would like the band.

No way this letter is from Lou Reed. I can't imagine Lou listening to The Cure.