[I first posted this back in 2011, but for obvious corona virus reasons, I thought it might be amusing to re-up it. --S.S.]

Attentive and/or long time readers may perhaps recall the story of my first high school rock band, The Plagues, and our 1965 adventures in the recording studio. Or not.

In any case, about two years after those epochal sessions -- during the fabled Summer of Love, if memory serves -- Allan Weissman, my old chum from The Plagues, and I were hanging out in his basement in sylvan Teaneck, New Jersey, when he informed me that he had just written a song in a style that might be considered Dylanesque. After he played it for me -- it was called "Cassandra," as in the Greek babe from the ancient legends -- I concurred, and we soon worked out a rudimentary arrangement; Allan was on bass and vocals, while I flailed around on a crappy Japanese guitar of some sort (I hadn't scored my fabled 1959 Les Paul goldtop at this point). 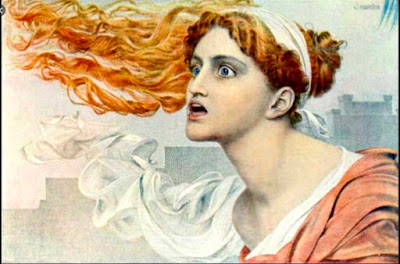 I decided that the song needed some kind of opening figure, a la the stuff Roger McGuinn did for The Byrds, and I finally came up with one. Unfortunately, given my limited guitar skills, what I came up was not merely lame, but in fact The Lamest Riff in History©. Which is to say a simple ascending and then descending single note sequence that was essentially...uh, just a G-major scale. And even that description overstates its level of inspiration.

Undeterred, Allan and I recorded a version of the tune, in mono, on one of those Wollensak reel-to-reel tape machines that everybody, including your high school AV department, had in those days, and I seem to recall thinking even then that my contribution to the track was vaguely cringe-inducing. What I would think now, I have no idea, because the tape itself has long since disappeared. And hopefully will remain so.

Anyway, cut to 2010. I had just reconnected with Allan and the rest of the high school chums with whom, as those same attentive and/or long-time readers mentioned above doubtless know, I had toiled for years in a subsequent garage/basement band called The Weasels. And Allan had given me a CD of (Weasel) The Other White Meat -- a home-made album the guys had recorded (without me, obviously) in 2004.

And suddenly, after I put the CD into my computer -- THERE WAS THE RIFF!!!!

Yes, nearly four decades after it was first committed to magnetic tape, the guys had done a remake, if that is the word, of "Cassandra." A song which is actually pretty cool, despite my...well, you know.

And here it is, exactly as my astonished ears first beheard it again.

The feeble contemplation that is going on inside
The mutilated warnings that they won't let you confide
Oh, ring the trumpets on their ears
The new Titanics come with years
Cassandra, turn your head to other people.

Hold your banner high until it stretches to the ground.
Shake the dead; the old, the buried recognize the sound.
Put yourself in ages hence
Glance, the foundlings never sense,
Cassandra, turn your head to other people.

Shout the call; the air is dead;
They'll never understand.
It echoes off the tired feet that walk upon their hands.
Deny the cradles, rob the graves,
The sirens drone, the prophet raves;
Cassandra, turn your head to other people.

I thought at the time, and still do, that "the tired feet that walk upon their hands" is one of the most, shall we say, remarkable lines ever.

I should also add that it is a mark of what a mensch I am that, despite the centrality of my riff to the entire "Cassandra" experience, I have never asked Allan for a co-writer credit.