The Greatest Record Ever Recorded (An Occasional Series): Special "Vanda and Young are Literally Gods" Edition

[This is an old post, but I'm re-upping it because our antipodean chum (and friend of PowerPop) Peter Scott just sent me the mp3 on the off chance that I didn't have it. -- S.S.]

One of the greatest (and most obscure) lost singles of the 70s -- indeed, in rock history -- is a little number called "Natural Man" by The Marcus Hook Roll Band.

The MHRB were actually Harry Vanda and George Young of The Easybeats, then toiling under various aliases in the period before they roared back as the production team behind the first couple of AC/DC albums (AC/DC's Malcolm and Angus, of course, are George's younger brothers).In any case, the record itself is one of the landmarks of the Glam Era -- a perfect three chord "Sweet Jane" derivative with hilarious topical lyrics, gorgeous layered electric and acoustic guitars, and absolutely brilliant production, including a bass guitar and cowbell breakdown (a la the bit in Free's "Alright Now," but hookier) that sets up a massive series of final choruses that once heard are etched into your auditory canal forever. An absolute masterpiece, is what I'm saying. 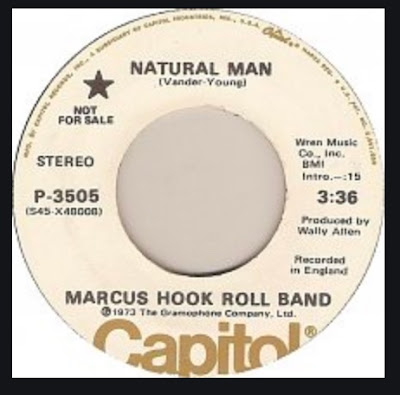 You can read a contemporary account of the single -- from the now defunct house organ of United Artists Records -- online, although I'm having trouble getting the link. Incidentally, the author of said piece, Martin Cerf, was one of the hipper record company guys at the time, and a friend to numerous rock journalists of the period including the late great Greg Shaw; he may, in fact, have been a partner in Greg's BOMP Records, although I'm hazy on that.

Doesn't play for me.

What Steve is too modest to tell you, is that he brought the song around to our band back in the day; and we learned it - with him singing the lead. He always gave it a bravura performance.
And it is absolutely true that whenever we played it at a job, it always went over really well, even though nobody in the audiences had ever heard it before. It was one of the few times we could actually get people to dance.
And the cowbell break was the icing on the cake!