One of the oddest pairings in the recent political landscape has been the somewhat surprising conjunction of evangelical Christianity with Judaism. I guess I'm the only one who recalls that callers blathering about the International Jewish Banking Conspiracy were a longtime staple of the sort of late-night radio that has since morphed into your Limbaughs and O'Reillys and Coulters: bizarre people up too late and spewing shit in the wee hours. The talk radio hosts in those days would let these people go for a moment, then cut them off. Now, of course, they're the hosts.

September 11, 2001, among its many somewhat bizarre effects, created a rapprochement between evangelical Christians and Jews as they teamed up to fight the Mohammedan Menace© the world over. I hear that your Rapture Right actually want to poke the Middle East with a stick until someone nukes Israel because that's supposed to bring Jesus back, but I confess I do not have independent confirmation of that (except for one family member, married into the Baptists, who confessed to me that they terrify him: "They really do want to cause the end of the world!"). The nuclear annihilation of Israel seems like an odd goal, but even odder when you consider the political alliance between these two groups.

So it's nice, I guess, to see them return to a state of mutual distrust.

Today's example comes from the office of Georgia State Representative Ben Bridges, a Republican from Cleveland, GA, whose office this week released a memo opposing the teaching of evolution in schools, not because it's unGodly per se, but because it's well, you know.

“Indisputable evidence — long hidden but now available to everyone — demonstrates conclusively that so-called ‘secular evolution science’ is the Big-Bang 15-billion-year alternate ‘creation scenario’ of the Pharisee Religion,” the memo says. “This scenario is derived concept-for-concept from Rabbinic writings in the mystic ‘holy book’ Kabbala dating back at least two millennia.”

The memo calls on lawmakers to introduce legislation that would end the teaching of evolution in public schools because it is “a deception that is causing incalculable harm to every student and every truth-loving citizen.”

“I did not put it out nor did I know it was going out,” Bridges said. “I’m not defending it or taking up for it.”

The memo directs supporters to call Marshall Hall, president of the Fair Education Foundation Inc., a Cornelia, Ga.-based organization that seeks to show evolution is a myth. Hall said he showed Bridges the text of the memo and got his permission to distribute it.

“I gave him a copy of it months ago,” said Hall, a retired high school teacher. “I had already written this up as an idea to present to him so he could see what it was and what we were thinking.”

Hall said his wife Bonnie has served as Bridges’ campaign manager since 1996.

Bridges acknowledged that he talked to Hall about filing legislation this year that would end the teaching of evolution in Georgia’s public schools. Bridges said the views in the memo belong to Hall, though Bridges said he doesn’t necessarily disagree with them.

“I agree with it more than I would the Big Bang Theory or the Darwin Theory,” Bridges said. “I am convinced that rather than risk teaching a lie why teach anything?”

Why teach anything indeed? I mean education makes people think, sometimes even about not voting for bigots. Better just to avoid the whole scenario. 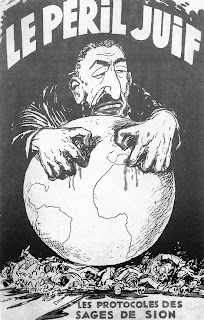 Gah. I genuinely don't understand why anyone anywhere ever would ally themselves with these people, but then I'm a moonbat, so what do I know?

The Aging Hipster has more.
Posted by NYMary at 6:08 AM

The good thing is that they're no longer really trying to hide it. When people get to see what their real agenda is they go running as fast as they can.

At least that's the hope.

“This scenario is derived concept-for-concept from Rabbinic writings in the mystic ‘holy book’ Kabbala dating back at least two millennia.”

Everything he knows about the Kabbalah he learned from Madonna. There is no mystical holy book called Kabbala.

That guy is about 30 miles from me. He's crazy!

TKK, I may be going out on a limb here, but I'm assuming Bridges (or his campaign manager) have no actual knowledge of Judaism. I feel pretty good about making that guess, actually.

You're gonna start getting fans of the Stormtrooper Girlz, er...Prussian Blue trolling again any minute.

to read the transcript was one thing, but to hear it in the cornpone accent of his...eesh, that made it scarier. did i time warp back to the 50s or something?