Compare and Contrast: Tales From the Food Service Industry

"He's a drag. Cat gets thrown out of a restaurant, and he writes a song about it."

That was Bob Dylan's verdict on Sonny Bono, whose 1965 solo single "Laugh at Me" was, in fact, inspired by Bono having been ejected from a trendy LA eatery due to the then scandalous length of his hair. 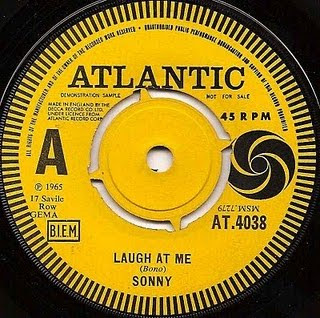 This is a sublimely ridiculous record, at least I think so, and I must confess to having become somewhat obsessed with Bono's oeuvre of late. I think re-hearing that Terry Reid cover of "Bang Bang" that I posted the other day had something to do with it. In any case, I'm devoting way too much time to thinking about Sonny.

Which of course leads us to this -- a seemingly dead serious and irony free Blonde on Blonde style cover of "Laugh at Me" by Mott the Hoople, from their 1969 debut album. 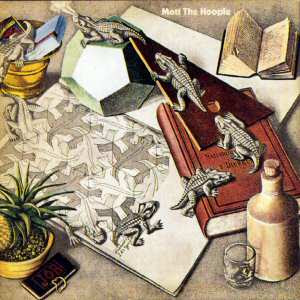 And from their 1988 LP, here's world's most entertaining roots-rock band The Skeletons with their rather more obviously parodic cover version. Note that bassist/vocalist Lou Witney recasts Sonny's original opening rap as a tribute to a bunch of guys who don't often get their deserved props -- all the bald-headed rockers everywhere. 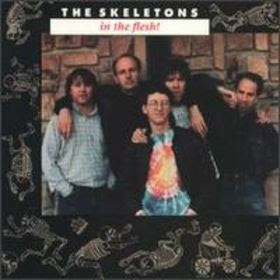 Words fail me, finally.
Posted by steve simels at 12:15 AM

Could the Mott the Hoople version be any slower? Just what we need -- a super-sized length. But it's just great.

Thank you Lou, for singing of our agony and shame!
And well at that.

The Sonny Bono paradox is well worth brooding over. "Laugh at Me", "Bang, Bang", "I Got You Babe" and even the lyrically craven "Revolution Kind" take big, brave melodic steps up the spectorish staircase. The man married a formidable chick, wrangled himself a prime time TV show, and got elected to congress. But even if he had done none of these things, he got his name attached to "Needles and Pins", which is a monument more durable than brass. His greatest failing, artistically, besides being an idiot, is how insipidly he deploys his spectorish sound pallette compared to that other acolyte, Brian Wilson, who took the final step and internalized spector's madness as well as his sounds. Spector's baldness is another thing all together.

It just seems wrong that Sonny Bono is famous and Lou Whitney is relatively unknown, although I suspect Lou is right where he wants to be. By the way, Skeletons/Morells precursors The Symptoms did a great "Double Shot of My Baby's Love."

I was going to try to make some point about Brian Wilson and Sono Bono, but then read that Faze had made it faster and better than I could articulate it.

Somebody covered that a few years back.

She started smoking pot
Just to keep herself from flipping


hey, worked for me.

Well it's been said Sonny was in on his own joke (by his friend John Waters in a NewsHour retrospective following Sonny's demise). Ie, Sonny >knew< that he was a drag (in Dylan's words) and he sold tons of records by poking us in the eye with it. Lost causes (and/or fatuous causes, like the length of his hair during the Beatles era) made him look like a maverick (see his political career). I think he knew what he was about . . .

And yet, and yet, the Mott the Hoople treatment, which I have heard here for the first time (Thank you Steve!) is both brilliant parody and loving tribute to the Tom-Wilson-era Dylan sound that so many LA folk rock clone acts were copying (eg, Sonny/Cher, early Grass Roots, Barry McGuire). Mocking, but perfect. Hard to laugh at it, because it's so good. A Dylan imitator's imitation of a Dylan imitator. Something like that. - AP

Steve, I have a Sonny Bono tribute cd that was released in 1991 on the Bogus label called "Bonograph-Sonny gets his Share". It has cool version of "Laugh at Me" done by Otis Ball as well as 15 others ranging from the obvious to the Jimmy Silva Sextet's version of "Pammies on a Bummer". It also comes with a somewhat bemused liner note from the man himself.