If you were here a few weeks ago, you may recall a long and self-indulgent story about a recently discovered 1970 film -- Party -- with a live performance by my Jefferson Airplane wanna-be be college rock band. (We were called God. Don't ask me why).

Rather than rehash the story, here's the link. Let's just say that Party features mucho sex, drugs and undergraduate angst. A typical 16mm black-and-white student film of the period, in other words.

In any case, the film's director Jeff Alan -- at my urging -- has finally transferred it to the digital domain. Nobody involved with the project save him, of course (myself included), has seen the film in decades, and a DVD premiere party is scheduled for June. Which means that many now extremely elderly people, including the film's co-stars (who appeared briefly starkers), should be in attendance.

Until then, Jeff has forwarded me these screen caps from the concert sequence, and frankly, words fail me... 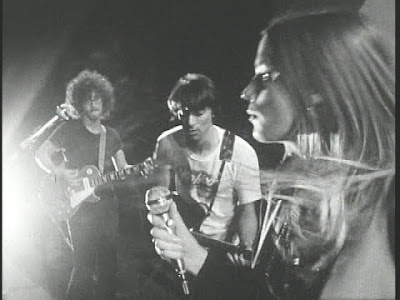 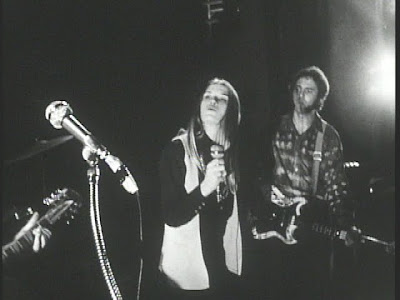 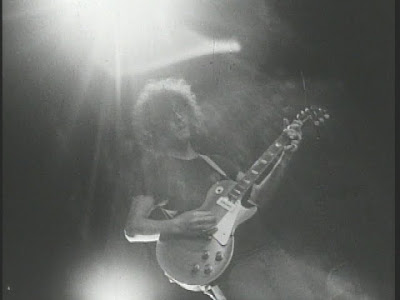 ...except to say, I think we look pretty cool, and wouldn't it be amusing if everybody who made this thing, including us, actually turned out to know what they were doing? Heh.

I should also add that I sold the beautiful 1959 Les Paul guitar I'm playing in those shots for a few hundred dollars (to pay back rent) in 1977. If I was to tell you how much it would fetch on the collector's market today, I'd have to slash my wrists immediately afterwards.

Oh -- and if you want to hear the song we're actually performing in the scene from whence those shots derive, there's an mp3 over at the link.
Posted by steve simels at 12:05 AM

And you wouldn't have to slash your wrists - there would be plenty who would do it for you for not letting them buy that guitar off of you for more than you sold it for...

OK. I see no order form for autographed, SIGNED prints, so will print one from here, forge your signature (along with touching personal message,) and frame it.

All the best,
God"

BTW, may I just say how bummed I am that nobody seems to understand how brilliant the title of today's post is?

Dude, you are doomed!