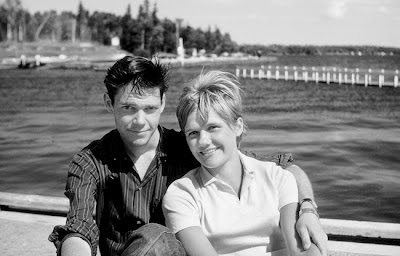 That's Neil and his first girlfriend, Pam Smith, at Falcon Lake, Manitoba in August of 1964. Picture = 1000 words, if not more.

You can read the piece over here. Lots of fascinating stuff, but nothing specifically -- alas -- about why Neil seems to have bailed on the Buffalo Springfield reunion tour, which is apparently now deader than the Papal penis.

Although this bit about a recent show with Crazy Horse...


He played that night as if he were mad at Old Black [his Les Paul guitar], even if he smiled into the squall. The crowd remained enthralled as he tortured a single note with the whammy bar, although this kind of indulgence has worn out some of his other playing partners. “We’ve played that note, can we move on, Neil?” Stephen Stills says with a laugh over the phone as he recalls playing with Young.


...may have some small relevance.
Posted by steve simels at 8:26 AM

I dig the fact that Neil plays guitar like it was handed to him for the first time. Makes him who he is.

It would be very, very difficult to not be quite conflicted about Neil if you were Stephen. But for my money, I will take Neil's one note over 12 of Stills'.

Neil's note's for me.

I saw Neil's wife, Pegi, along with her band The Survivors on Sunday. One of the Survivors is Spooner Oldham, got to chat with him a bit after the show. (2 others are Phil Jones and Rick Rosas, both backing Terry Reid in the video much loved in these parts).