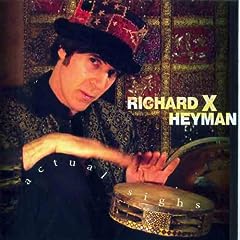 [One of the nice perks of writing here is that people send me terrific albums I otherwise probably wouldn't have heard. This is one of them.]

But let's move on. For those who've been as out of touch as yours truly, here's what you need to know. Richard X. Heyman is a singer/songwriter and multi-instrumentalist (one of the best, actually -- he's a killer drummer, unlike most of the breed) who's been making wonderful classicist pop rock (occasionally on major labels) since 1986. The album currently under discussion is in some sense a remake. What happened was that back then Heyman had twenty songs ready to unleash on the waiting world, but after recording six of them he couldn't afford any more studio time and decided to release what he'd finished as a mini-album (or EP, as they used to be called). On "Actual Sighs," ("Actual Size" back in the day) he's re-recorded the original six and finally gotten around to the orphans. As Puterbaugh points out, there's really nothing to compare to it in pop history except for Brian Wilson's revisiting of the Beach Boys' "Smile," except that (for me, anyway) "Actual Sighs" is more consistently terrific.

In any case, Heyman -- a pop classicist, as I mentioned earlier -- has all the influences you'd expect; the aforementioned Beach Boys, Beatles, Byrds, Who, Kinks, "Something/Anything" era Todd Rundgren, yada yada, and a few less obvious; my current obsession on the album, "All in the Way You Found Me," is an unlikely summit meeting between Steely Dan and the Zombies, and the wonderfully sunny "Without True Love" sounds like the greatest Peter and Gordon single never made (true fact: after the first two verses the listener awaits the killer bridge sure to come, and when it arrives the effect is almost chemical). I also hear a bit of solo Roy Wood in "The Gazing Moon," with its multiple acoustic guitars and discreet string quartet, although comparisons to certain more famous products of EMI's Abbey Road studios are also appropriate. Whatever -- it's gorgeous and audacious. And the bottom line is that while Heyman is upfront about his influences, the end results never sound like pastiche.

Heyman doesn't have what you'd consider a typical genre voice. When he sings in his (sort of) higher register, as on the meltingly lovely ballad "Hoosiers," he's as winsome as you could want, but most of the time he employs a gruff-sounding almost-baritone that suggests a more expressive Warren Zevon. (And on the album's two amusing mutant blues numbers he sounds a bit like John Hiatt). No matter: The point is that Heyman's singing, which is to be sure, unfailingly effective, is not really the point. The point is his astoundingly well-crafted songs and the brilliant arrangements and production touches that decorate them.

I have my favorites here, which seems almost churlish, like picking your favorite child, and although they change with every spin of the album, right now they include "Masquerader Man," a glorious piece of 1967-ish baroque pop that sounds like a barely remembered Summer of Love single that should have been on "Nuggets II" (think XTC as the Dukes of Stratosphear with trumpets) and the concluding "Special Love," on whose coda Heyman tosses off as casually brilliant an electric guitar and mandolin exchange as has ever been heard by sentient mammalian ears.

Have I mentioned that despite the fact Heyman plays just about every note here the whole thing always sounds organic, as if it was the work of a real band? Or that the drumming is particularly exciting throughout, with lots of riveting Keith Moon flourishes? Or that "The Gazing Moon" is a goddamn masterpiece? (Okay, I think I sort of implied that last earlier)

Here's the deal: I waited twenty years to find out how great RXH is, but I'm an idiot. If you're reading this and don't immediately order "Actual Sighs" (which you can do at www.richardxheyman.com) you need to come up with your own excuse.

Postcript: There is, alas, no video from the album, but here's the Merseyebeat revisionist "Cornerstone" from a few years back to give you an inkling.

NYM adds: early in his career, Heyman played with Tommy Keene. Now there's something I'd like to have heard!
Posted by steve simels at 8:56 AM

Dear Steve: Welcome to the party and please don't feel badly that you arrived a tad late, because your timing was excellent. You showed up just at the moment when Richard's best album to date appeared. I did the very same thing, although the album at that time was "Cornerstone." You've done a really wonderful job of capturing the enthusiasm one feels upon discovering the musical genius of Richard X. As a fan of more than a few years, I've got great news for you: that enthusiasm only continues to grow. When the iPod's on shuffle and it grabs an RXH track - any RXH track - you're going to scramble for the volume control to crank it up. You're right, the effect must be chemical; there must be special neurons in the brain that are "reserved" and can only be lit up by an RXH song. Sometimes, you feel it; the chill that rushes down your spine during the opening bars of a favorite track. I bet you're getting zapped already, not only by the bridge in "Without True Love," but also by the sublime "Gazing Moon." So... "astounding," "brilliant," "terrific," "gorgeous," "audacious," - you bet. And unless I've lost all sense of time, "Actual Sighs" is a 2007 release, so you've now got only 9 spots left to fill for your next Top Ten list.

If it came out this year, however,
it's in my Top Ten for sure.

You know what really kills me?

The wordless keening right before the end of "All in the Way You Found Me." I get shivers just thinking about it.

You can really hear the Kinks/Who/Beatles influences in the song.