Long-time or attentive readers may recall that, a few years ago, I exhumed one of my dead-trees efforts from The Magazine Formerly Known as Stereo Review, in this case -- to be specific -- my review of John Lennon and Yoko Ono's Double Fantasy album, written shortly after John's murder in 1980.

In the new intro to said piece, however, I noted that...

"A few weeks after the piece appeared I got a very nice note from a woman who had worked as a personal assistant to Brian Epstein at the height of Beatlemania. She told me that of all the reviews of the album she had seen, it was the one that most resonated for her. That meant a lot to me."

...and over the intervening years it has increasingly irked me that I had never saved the letter and thus had forgotten the name of the woman who wrote it.

So you could have knocked me over with a feather when I read the following in a piece by Dennis Hartley over at DIGBY'S HULLABALOO on Saturday: 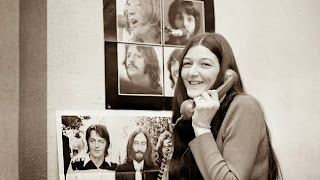 The unlikely star of this breezy study is an unassuming, affable sixty-something Liverpudlian woman named Freda Kelly. At the tender age of 17, she was hired by manager Brian Epstein to do odd jobs around the office while he focused on the then-fledgling career of his young proteges. A year or so later, she became the chief overseer for the band's fast-growing fan club, embarking on what was to turn into an amazing 11 year career as (for wont of a better job description) the Beatles' “personal secretary”, from Cavern Club days to the dissolution of the band.

What makes Freda unique amongst the members of the Beatles' exclusive inner circle (aside from the fact that she remains a virtual unknown to the public at large) is her stalwart loyalty to this day, vis a vis protecting the privacy of her employers; she's never written a “tell-all” book, nor cashed in on her association with the most famous musical act of all time in any shape or form.

Granted, after appearing in this film, she won't be so unknown, but she makes it abundantly clear this represents her finally caving in and appearing on camera to say her piece (since we're all so damn nosy and insistent), then she'll be done. And she does tell some tales; although none of them are “out of school”, as they say. But that's okay, because she is so effervescent and down-to-earth that its like having her over for tea to peruse her scrapbooks and enjoy a pleasant chat...

...and realized that Freda was, without question, the long-ago note writer. Nice to learn she's still alive and well and, apparently, delightful.

I'm informed that you can stream it from Amazon if it isn't playing at a Hell Octaplex near you.
Posted by steve simels at 7:39 AM

Been wanting to catch this, and I will on PPV sometime this week. Just was catching up on Showtime's Dexter and Ray Donovan for a few weeks. Saw the finales last night, pretty good.

Looking forward to seeing this.

The title comes from one of the first Beatles Christmas fan club records. After thanking the imaginary fan club secretaries that Brian Epstein created to sign off on all the fan club materials (he gave them nice posh London names), Paul then thanks the (real) secretaries in Liverpool, and when he mentions Freda's name, John yells out, "Good old Freda!"