So the other day I was comfortably ensconced, popcorn in hand, in the dark vastness of my local Hell Octaplex. When the pre-trailer music-radio played a new recording by Placebo called "Loud Like Love."

Now, Placebo is a band the very existence of whom I had managed to fail to notice until last week. But the radio announcer/dee-jay was kind enough to inform me that they've been around since the early 90s, are big in the UK, and in fact have sold 12 million albums worldwide (none of them to me, obviously). 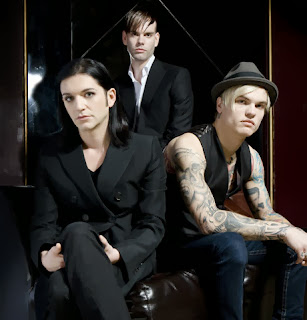 In any case here's the track in question.

1. The song seems to be a pleasant enough, if ultimately mediocre, piece of 21st century folk-rock.

2. Is it just me, or does the singer sound unpleasantly like Neil Diamond in his "Coming to America" phase?

3. What kind of dumb fucking name is Placebo? I mean, what the hell -- some other band had already used Ersatz or Phony?
Posted by steve simels at 10:45 AM

Not horrible, but generic and boring, and too long, clocking in at almost 5 minutes. Silly name Placebo,
having no musical effect but presented merely to satisfy a listener who supposes it to be music.

I think they either want us to know they're being incredibly ironic or are just meaningless, powerless, lifeless

All in black, a porkpie hat, lots of tattoos --- how original.