Patti Smith will be among the performers at the Concerto di Natale, the Vatican's annual Christmas concert held in Rome since 1993, next month, according to The Independent. The concert will take place at Auditorium Conciliazione, a venue located about a 15-minute walk from the heart of Vatican City, on December 13th. The Italian-language newspaper Il Corriere della Sera suggests that Pope Francis invited Smith, according to International Business Times. The program – which will also feature DJ Bob Sinclar and the singing nun who won this year's edition of The Voice of Italy, Sister Cristina Scuccia – will be broadcast on Christmas Eve in the country.

Smith...met the Pope last year in St. Peter's Square at the Vatican. She described the pontiff as being "very interesting" at the time and said she "liked him a lot," according to Huffington Post (via CathNews USA)...Smith explained her relationship with Christianity in the context of her song "Mercy Is," which appeared in Darren Aronofsky's film Noah earlier this year. "I have a very strong biblical background," she said. "I studied the bible quite a bit when I was young and continue to study it, independent of any religion, but I still study it." 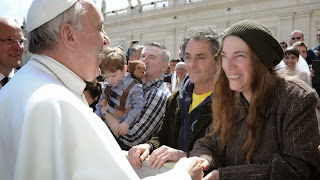 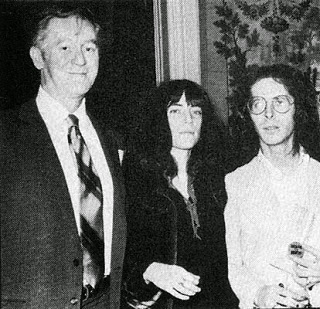 [Note photographic evidence that I am One Degree of Separation from Pope Francis. How fricking cool is that? -- S.S.]


Words fail me. That's Patti Smith, as in the Patti Smith whose first line in the first song on her first album is "Jesus died for somebody's sins, but not mine."

In any case, quite by coincidence, I'm actually gonna see Patti discuss "Mercy Is" at a screening of Noah at the Museum of the Moving Image in Astoria tonight. I'll probably be too nervous to ask her a question about anything, but I'll keep you posted.

I should add that I'm liking this pope more and more these days.
Posted by steve simels at 8:01 AM

I love Pope Francis - kind of wish I was still Catholic. But given that I don't believe in a Abrahamic god, I guess that won't be happening anytime soon.

Ask her a question - why be nervous - she is just a regular person after all.

Is that Kenneth Tobey standing to Patti's right?

Patti has always been such a Papal groupie!

Benedict was more of a doo-wop sort of guy, though I vaguely remember him mentioning the Stray Cats in his 2009 encyclical letter, Caritas In Veritae (Charity In Truth), where Benedict argues that human rights presuppose responsibilities.

Liberals love Francis cuz he's such a touchy-feely kinda guy. He better watch his back, lest he get the John Paul I treatment. Sad to say, but throughout history Absolutists have prevailed in any given civilization.