Didn't Wake Up This Morning 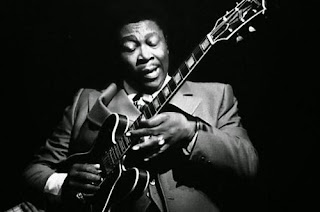 To the best of my recollection, I only saw him live once, at the Fillmore. His brand of blues was always a little too urbane for my taste, but obviously the guy was a one of a kind master.

I should add that when I was growing up it was an article of faith in musician and critics circles that the live album presented in its entirety below -- taped when B.B. was still playing what used to be called the chiltlin circuit -- was one of the greatest records ever made. And yes, it holds up.

Live at the Regal. That's the one. RIP Beale Street Blues Boy.

I had tix to see him with Jeff Beck at the PNC Arts Center the night of the Big Blackout --- never got there, and the dicks at Clear Channel wouldn't refund my money. They had generators, ya see, and so they held the concert anyway, even though most people couldn't make it.

B.B. was a class act. I saw him many times over the years. He did the old school R&B shows where the band would warm up the crowd for a couple of numbers and then vamp him onstage with an outro when he left.

He always put on a fine, very planned and rehearsed show. Saw him many times over the years, with The Jimmy Page Yardbirds, with Canned Heat and Fats Domino at the Bowl in 1969, and later that year as one of the openers for the Stones at the Forum. He played with Lee Michaels and The James Gang at the Forum too circa 1971. I also saw him at the Whisky a Go Go around that time.

I had an acquaintance who worked in the administration at the Chino Men's Prison and got me into many shows there. They were free. B.B. played there in mid-1972. The prisoners really liked me and Sandy. It was very awkward. We felt like Joey Heatherton entertaining the troops. Those poor bastards.

That prison rocked pretty hard during the early Seventies. One of the best shows I saw there was when Delaney & Bonnie & Friends & the Flying Burrito Brothers played there in February of 1970. Amazing show. Clapton was still in the Bramlett's band along with Dave Mason and Rita Coolidge, plus the future Dominos. And Gram was still in the Burritos and they were "on."

B.B. played the Hilton in Vegas a lot in the mid-Seventies as well. I'd guess that I saw him every other year up until the 2000's. Like I said, the shows were pretty predictable, but he was a pro. Used to see Etta James whenever she came through too, god rest her soul. I liked her shows much better, even when she could barely get out of her chair.

one of the great moments in recorded history is the modulation up a half step during "It's My Own Fault."

Also liked the shout-out to my hometown of "Peoria, Illi-noize" (it had to rhyme with boys, doncha know...)

Tony J of Johnson and the Community said...

BB used to do college shows and afterward shows would let young blues kids jam with him in hallways for the thrill of a lifetime.
Class act, love the man!

How is it possible for anyone not to like King's guitar playing?

Saw King with Jeff Beck outdoors at Jones Beach, in Wantagh, NY in 2003. Never had I seen a performer so clearly enjoying himself on stage as King did that night. And when Beck played with King in front of King's band, more than a few angels got their wings.

And while I wondered soon afterwards whether that joy I saw in King that night was something he experienced most nights performing, or whether the joy was simply part of King's professionalism, I finally accepted the notion that it just didn't matter -- because to me, what I saw was no act.