Hope I Die Before I Get Old -- Oh, Wait, I'm Way Past THAT Deadline!

Going to see The Who on their 50th anniversary tour on Saturday at the newly refurbished and reopened Forest Hills Tennis Stadium.

And, coincidentally, going to attend my 50th anniversary high school reunion on the Saturday after that.

In honor of both these depressing occasions, the obvious musical accompaniment would have to be the Japanese stereo remaster of "My Generation." 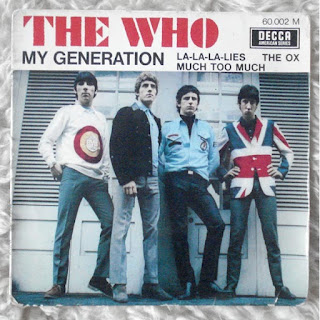 It sounds great, obviously, but in case you think you're not hearing all the guitar parts from the familiar hit mono version, you're right. Pete Townshend added some extra stuff for the mono mix using a technique that we used to call "sound on sound." It's not really overdubbing in the modern meaning of the term, and in any case that added guitar part does not exist in the stand-alone sense.

I'll let you know how the show was on Monday.

Arguably the greatest - yawn - "youth anthem" ever. Well, that and Summertime Blues.

Born To Be Wild.

That 2008 Japanese box with both mono and stereo versions of the album is pretty cool. It's the way to go, as far as getting nearly everything, along with the various artwork. Nice package to fetishize. The mono version on that one is the best of any CD IMO. I think it's out of print, but not that hard to find, if you're willing to fork over the ducats.

I'm not a big "stereo" person. Especially when the mixes were created in 2002. I like to remember things the way they were. All this re-mix, re-master stuff is kinda over-rated. As are boner tracks.

The latest 2014 edition of My Generation has newly added overdub's by Pete and Roger. WTF. Why?

Enjoy Half-the-Who, Steve. Zak and Pino are good, but they ain't no Thunderfingers or Moony. I'm sure the band will churn out the hits like human jukeboxes and give the people what they want. Hopefully, it's not too geezerly.

The key to seeing the Half-the-Who these days is to go in with low expectations. They usually exceed them and euphoric nostalgia will overcome you. Now if we could just get them to axe You Better You Bet from the set and replace it with "Substitute".

Joan Jett, who I've never seen in concert, is opening. Could be a hot one!

Forest Hills Gardens is one of the nicest residential areas in all of NYC. Enjoy the show.

If she's juiced and firing, she'll give you something to live for. She'll grab ya and have ya till you're sore. She'll make you tremble and make you shake. With Stone Age love until daybreak.

Hit me with those power chords. Drive that beat deep into me. Pound it hard and make me sweat. Propel the dance to fever pitch. Bring the joy tell it hollers and screams. Like pulling my hair while I'm soaking your dreams.

I love rock 'n' roll. Put another dime in the jukebox, baby.

I got a friend and she's wilder than me:-)

Y'know, overall "Sell Out" is my favorite Who album, but on certain days, "My Generation" (definitely the mono version) is my "go to" Who. It was interesting to hear the stereo version, but I inevitably play the mono on the Deluxe Edition CD. I was just glad to have the fucking thing remastered.

Treat it more like "Daltrey and Townshend and friends play the Who!" and you'll have fun, and likely get to witness some good stuff. Daltrey and Townshend - especially the latter - know it's not really the 'Oo as well, but they both still get off on performing, and in New York, more-or-less the center of Who fandom in the US...they'll give it what they've got.