The Way We Were

For those of you who've been following the saga of the forthcoming "new" EP Letter From Liverpool, by the fabulous Floor Models (featuring a bass player whose name rhymes with Sleeve Nimels), two bits of news. The entire thing has been mastered and is ready to go (as soon as a certain Shady Dame of my acquaintance finalizes the artwork).

More to the point, the guys and I have had so much fun in the studio over the course of the project, we decided we're not quite ready to retire yet. So we're getting right back to work on remastering and reissuing this 1995 album by a later incarnation of the band, which has been out of print for a while. 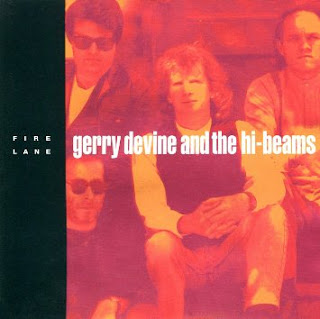 Here's a live tape we recently discovered in the vaults and digitized; we're considering including it on the reissue as a bonus track. I think it kicks major ass, if truth be told.

A studio version of that, in a significantly different arrangement, closes the CD, but I've always been partial to this one. The quote from "Day Tripper" at the end is a particularly nice touch, I think.

Have a great weekend, everybody, and I'll see you on Monday with a less self-indulgent posting. Or not.
Posted by steve simels at 9:17 AM

Details please: how did the Floor Models morph into the Hi-Beams? How did you get a record contract? Etc. etc.

The history stuff is too convoluted (and ultimately boring) to get into, but the record deal (such as it was) came about because thanks to Stereo Review, I got to know a very nice guy who ran a little indie label -- Gadfly -- out of Vermont. Basically, I pitched him on our demos, and he said sure, he'd put them out if we put up the production costs. So we paid for the artwork and the studio time, and he paid for pressing the resultant CD and the distribution (which he did very well -- we were in every record store we ever visited once the album came out).

The label seems to be out of business these days, and we have know idea what's happened to the guy who ran the label.

Mitch -- if you're out there, we hope you're well.

I ordered some Tonio K stuff from him about two years ago; took about four or five months to get it (I got the impression that he was assembling a critical mass of orders at a time prior to getting them made) but I did get the merchandise, and my card didn't get charged until they shipped.