[So speaking as we were yesterday of producer Lewis Merenstein, I thought I'd repost this piece from 2013. Enjoy, if possible. -- S.S.]

I do not now care, and have never particularly cared, for Van Morrison's Astral Weeks.

Okay, there I've said it.

Which, of course, given the album's status as pretty much the holiest bovinae in the entire rock album canon, is more or less akin to confessing I was glad the Greek colonels overthrew King Constantine.

And lest you think I'm just being difficult, or trying to generate some sort of blog-hit controversy, I'm not. I don't dislike the album; it simply doesn't talk to me. Maybe it's genetic, I dunno, but I just find it a little dull. So sue me.

I bring all this up because the other day -- having some more than usual time on my hands -- I finally got around to purchasing a copy of an album called Tax Free that I've been meaning to check out for ages. And therein lies a tale.

Longtime readers are aware of my fondness for a Dutch 60s beat group called The Outsiders (not to be confused with the American greaseball outfit of the same name and era who hit it big with "Time Won't Let Me.") 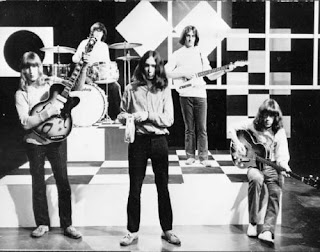 The Dutch Outsiders never had any of their music released in this country, but they were pretty big in Europe and they've developed a cult following in recent years; some folks claim they're the best 60s band for whom English was not their original language, and while I won't go that far, they were pretty damn good. Maybe not world class, but definitely worth hearing in that sort of Stones/Pretty Things snarling r&b derived rock style that was all the rage back then.

In any case, Tax Free was the band Outsiders singer Wally Tax formed after the breakup of that bunch, and unlike the rest of his previous oeuvre, their eponymous elpee was actually released -- albeit to an utterly oblivious public -- in the US of A.

What I didn't know until recently is that Tax Free's eponymous album has often been compared to Astral Weeks, presumably because it's produced by Lewis Merenstein (who produced AW), it features Richard Davis (who did similar duty on AW) on upright bass, it's in the same pastoral more or less acoustic quasi-jazz style as AW, and because it, like AW, makes me very, very sleepy.

Have I mentioned that John Cale plays viola on the album?

Anyhow, all of this is a very roundabout way of setting up a Compare and Contrast that may prove edifying.

From 1965, it's the angry young Them (featuring Van Morrison) and "I Can Only Give You Everything"...

Meanwhile, from 1967, here are the savage young The Outsiders (featuring Wally Tax) and "Story 16"... 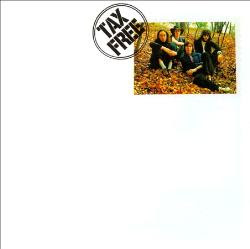 Seriously -- do either of those examples strike you guys as some kind of musical evolution? Or at least one worth writing home about?

Because what I hear in both cases -- and yes, obviously I'm exaggerating to make a point -- is more like a failure of nerve.

I can't listen to the Tax Free dude because I'm here in a cubicle farm at work and...well, who cares about my sitch.

But I can (and will) opine about Van the Man. You have inspired me to come out of the closet about Astral weeks. About Astral, I feel weakly. I'm just not that big on Van before Moondance. Not bad stuff...it just gets no traction in my head

But the albums between Moondance and Hymns to the Silence are the high water mark of all western civilization and a sure path to enlightenment and I'll fight the divil who says otherwise (to be read in a faux Irish brogue for full effect).

FWIW, Cyprus Avenue was the very first song during which I experienced the musical equivalent of Stendhal syndrome. Everything following Van's little interjection of "wait a minute" left me at a complete loss, and the moment shortly after when the harpsichord falls into line with the rest of the ensemble bordered on revelatory.

And to state the obvious, Lester's piece on the album is something else.

Thank you for saying the Emperor has no clothes. Astral Weeks is a critical sacred cow that has never grabbed me. The other one is Love's Forever Changes. Never heard what the big deal was. Maybe it's just a case of rock critic herd mentality– not wanting to be excluded from the clubhouse.

Well, I differ on "Forever Changes" which I have loved since the first minute I heard it in my dorm room.

The appeal of Morrison has always eluded me, not just "Astral Weeks." I know all the reasons why I should like him, but I've just never gotten the guy. His performance in "The Last Waltz" makes me want to -- as our esteemed host would say -- take a hostage.

You said what many of us say about "Astral Weeks." Don't get me started on "The Last Waltz" the worst piece of shit that gets routinely praised as a masterpiece. When I watch it (especially Van) I think, "punk (or something) has to be right around the corner." That whole scene was tired and played out in '76.

Calling Cleveland's Outsiders greaseballs may be sorta true but they wrote some tuff songs. Check out "What Makes You So Bad, You Weren't Brought Up That Way," "Girl in Love," "Was It Really Real," and "I'm Not Trying to Hurt You."

A bit off-topic but ... The Last Waltz is perhaps even moreover-praised than Astral Weeks. The film is great, partly because Scorcese doesn't shy away from making the Band's decline (and the reasons for it) evident.

I refer people wondering what the fuss is about to the 1971 live album Rock Of Ages, the same kind of summing-up/farewell but with the Band at their musical peak after 18 months on the road.

Astral Weeks, Rock of Ages...pshaw.
Want to know about an over rated, kneel at the shrine album...
PET SOUNDS.

Not quite my favourite Van, but it's close. I know your site is called PowerPop, but surely you can open your ears to something different? AW is jazzy, personal, introspective music and should be listened to as such ... not for every day listening. And no, it doesn't have the Stones-influenced adolescent-angry-young-man posturing that his Them recordings do, but something UTTERLY ORIGINAL (no credit for that?).
All you too-hip-to-like-Astral Weeklings out there ... turn down the lights, lay back and LISTEN to Cypress Ave (good choice, Steve).

I love all four of these. So sue me.

I have struggled to "get" this record myself though I totally understand and dig what the record means for jazz/folk, 1968 and a tone poem in the rock realm. Being a Bruce fan, I absolutely love Madame George as it's the foundation for Born to Run and Backstreets. I should read the lyrics to grasp the story more but I loved Van's explorations into rock, soul and country in his next releases much more. That said, I don't dislike the record, I do listen to it quite a bit and I do like it, simply for its impact on other artists.
-Paul

PS: I see you have solved your video-framing problem. Good work! A favorite site just got better.

Thank you, J. Lewellen for pointing me toward Lester Bang's "review" of AW, which I had never read or heard of.
Here it is:
https://personal.cis.strath.ac.uk/murray.wood/astral.html

All of you who don't get it, think it's MOR (!) or "a failure of nerve" (!!!??!) please read. You may still not like or enjoy it, but will I hope respect it at least. (Lester B was the least go-with-the-herd critic ever)

For me, Van, from Them to the double live album, was pretty damned consistent. Those 1973 Troubadour shows were the shit. Them was just fucking huge in SoCal. Double-sided Number One's. Their two albums put most of the other British Invasion bands to shame. I was huge into Them and the Animals back then. Even had The Pretty Things debut which I found in the bargain bin at Harris' department store in Berdoo.

Astral Weeks is a great album if you have the ability to listen into it, if you get what I mean. It's got texture. It blankets you in its warm narcotic. Just let it. Surrender.

AW got huge FM airplay out here at the time. Every fucking song.

But "Brown-Eyed Girl" is better.

I thoroughly enjoyed the Van concerts I went to from 1969-1973. Well, except for the time he played the Whisky with just two guys backing him (flute & bass). This was shortly after AW was released and I was but a precocious lass. It didn't go over well in a club setting. Wrong environment. Never to worry, he was billed with the Burrito Brothers. They were great that night.

I have the Tax Free album in my collection. Got in spring 1971 at Aron's on a high-school ditching record run with one of my boyfriends ("Contruction Chuck"). I like it. Clearly Tax was a Van worshipper. Scored Tax Free along with Love It To Death, Lizard, Tony Joe White, Crosby's debut and that Cactus album which has "Song For Aries" on it (my sign, BTW). https://www.youtube.com/watch?v=d5xmN5EHzNA

Got turned on to Outsiders 1968 "CQ" LP in by a foreign exchange student at my high school in 1971. Has moments. As with a lot of obscure bands from that time period, people scrounge around and have a tendency to over elevate them. Psych collectors in particular seem to have a high tolerance for garbage.

Oh, Vicky,
Just when I think I couldn't love you more. Agree with all the above, esp. "Van, from Them to the double live album, was pretty damned consistent. Those 1973 Troubadour shows were the shit."