Long time/attentive readers of this here blog are doubtless aware that an ex of mine who's still a good friend is an art director/graphic designer of significant repute who did a lot of rock albums that you may have seen, including the one for Remain in Light by Talking Heads.

I bring this up because last Friday -- which seems a million years ago, before Biden had been declared the winner of our recent exercise in the democratic process -- I was having lunch with my young musician friend Joe Benoit and we got on the subject of the great French composer Maurice Ravel. And I suddenly remembered that the great English steel guitarist B.J. Cole had recorded a version of Ravel's second most famous composition...

...on the Hannibal Records label, which said ex of mine of mine had done a lot of work for.

Alas, she hadn't done the B.J. Cole LP, but I remembered that she and I had collaborated on an earlier Hannibal release, which I don't think I've ever shared here. 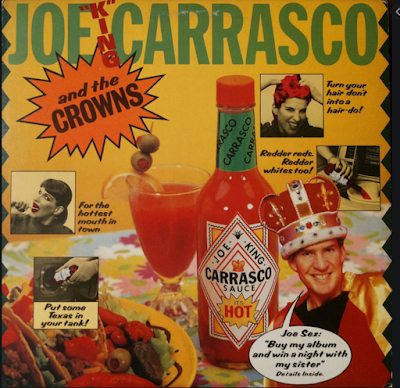 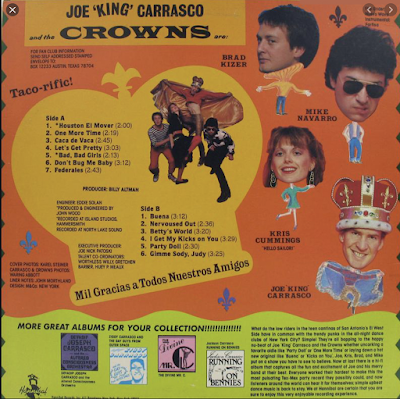 That's said ex in the photos on the front cover; I wrote the stupid bad taste jokes.

By the way, musically it's quite a fun album, if you can find a copy.

Whoa! I've always hearted the Joe 'King' Carrasco LP and had no idea you had anything to do with it, Steverino. 'Buena' is a particular favorite, and it's hard to come up with a better 3-way pun than 'Caca da Vaca.' Instant Tex-Mex party in a sleeve. I think I'll dig it out right now...

I see Carol on the cover twice, where are you?

Oh my did I get down to Joe King Carracci! Back in the day, of course.