The Byrds of Fall Are On Winter's Traces

You know, every now and then I really love my phony baloney job.

Case in point: Last week, when I had the opportunity to phone chat with one of my long time musical heroes, original Byrds bassist Chris Hillman, whose wonderful autobiography Time Between: My Life as a Byrd, Burrito Brother, and Beyond... 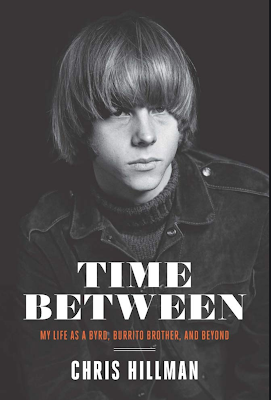 For starters, this is one of the best rock memoirs ever; as I told Chris, it reminded me of Bruce Springsteen's Born to Run, in the sense that a) Hillman turns out to be a really good writer, and b) that even before he gets around to the music stuff, the chapters on his childhood (in Hillman's case, in Rancho Santa Fe California) are absolutely engrossing and evocative. Note to Byrds fans: Chris gives the true fact lowdown on the real life character who inspired Hillman's great song "Old John Robertson"...

...originally recorded by the Byrds in 1967. Which in itself is worth the price of admission.

I should add that Chris turned out to be as charming and gracious as anybody I've ever interviewed, and that he shared a couple of wonderful stories with me, including a pretty hilarious bit about how he and his wife are dealing with our current trying times; suffice it to say it involves his fellow Byrd Roger McGuinn (and wife), daily Zoom trivial pursuit contests, and cocktails.

In any case, Time Between is an absolutely smashing read; you can -- and obviously should -- order the book (either via Kindle or an actual physical copy) over at Amazon HERE.

Steve, will we be able to read your conversation published somewhere?

Alas, no == my recording gizmo malfunctioned. It was a very brief conversation in any case.

Younger Than Yesterday was always my favorite Byrds album.

I've seen Chris and Roger play several times in the past few years including onstage together in Nashville during the Sweetheart of the Rodeo tour. Very cool that they're still friends after all these years even doing Zoom Trivial Pursuit competitions.