An a cappella vocal intro. Hand claps(!). A generally brisker tempo. A sort of James Brown-ian syncopation on the choruses. And that sublime middle guitar solo section conspicuous by its absence.

By Godfrey, from 1970 it's an early version -- completely finished, but ultimately shelved in favor of the track that became the hit -- of Free's epochal "All Right Now." 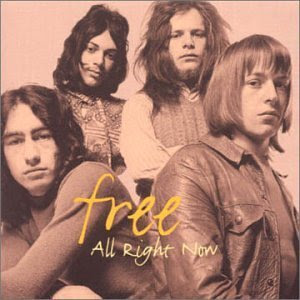 Sorry if this is old news to everybody (apparently it appeared on a Free box set a few years ago), but I just stumbled across it the other day and it blew my tiny mind. It's the same song, but so different; given that the beyond ubiquitous "official" version is so thoroughly imprinted in everybody's genetic makeup after all these years, it's really fascinating to hear how it was originally conceived.

They were trying for something verging on pop, from the sound of it; I suspect it would have been a hit as well, albeit not the classic rock icon the revised version quickly became.
Posted by steve simels at 7:56 AM

Pretty interesting ... In this version, the vocalist really has to carry the song, and he's not quite gifted enough to pull it off. Jagger could have done it. Or Stevie Wonder. But without that truly top-drawer vocal, they needed to pump up the guitar and drums.

I should add that I was relieved to discover that even at this stage the lyrics were pretty terrible.
:-)

Agreed with the above, with the added comment that the drum punch in the middle of the chorus just seems to bring everything to a dead stop.

In spite of all that, I kinda like the way the song was put together. It's more Grand Funk Railroad than anything else.

An interesting take on the evolution of a song. The final version is superior, even if the lyrics are inane.

Here's a live version from Paul Rodgers and Queen. A bit stronger, imho.

One of my favorite songs. The bass line is more complicated, but not better. It sure needs MORE GUITAR! I think Paul Rodgers is an almost perfect rock singer. This version is fun, but not close to the rocking version that was released. I am glad that they carried on and improved the song. But this is sure going on the iPod!

This is cool. Never heard it before. I recently picked up the 45 of this tune, which (from what i can hear) has a different bass track, a way more in-your-face guitar sound and an overall 'hotter' mix. Also with a slightly different arrangement. If you ask me, that original 45 version is way better than the album version you hear on the radio every day.
As over played as it is, this is still a righteous jam no matter which version you hear. Thanks for sharing this one.

And Rockin' Jeff, that explains my memories of that song sounding so much hotter on the jukebox at the pizza place where I took lunch almost every day during 9th grade....

The tastiest part--and it's quite tasty--is the smidge of a capella... kinda wish they'd riffed on that, and developed the rest as a slow acoustic jam. But I just got out of a car after a long road trip where all that came in was "All Right Now" (basically) so I may be suffering a classic rock reaction.