Wow, suddenly fans of the late great Don Van Vliet are coming out of the woodwork.

Take this familiar...uh, face. Seen recently with a CD of his masterpiece, Trout Mask Replica. 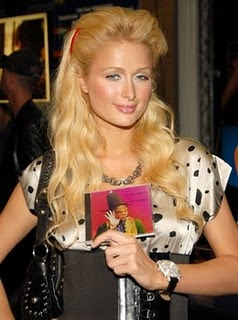 And just last week, another person famous for being famous announced his affection for the great rock avant-gardist -- none other than blow-dried Republican presidential hopeful (and by hopeful, I mean in the sense that I am hopeful that some day I will have sex with Anne Hathaway) and Twitter fan Jon Huntsman! 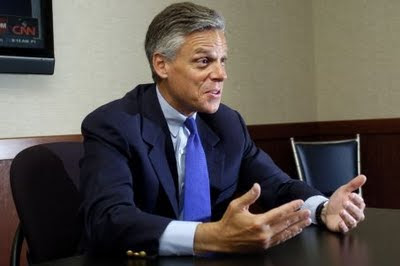 Jon Huntsman, in his quest for more Twitter followers and — as an aside, the White House –- is highlighting some far-out tunes.

Like, well, Captain Beefheart jamming on a beach somewhere a long time ago and singing a raspy version of “Electricity.” With lyrics like: “High voltage man kisses night to bring the light to those who need to hide their shadow deed…Go into bright find the light and know that friends don`t mind just how you grow.”

The former Utah governor and ex-Obama ambassador to China flagged his love of the singer, who died last year, with this flash on his Twitter account: “I wonder if a tweet where I admit how much I like Captain Beefheart will make the followers skyrocket even more!”

The tweet provoked some fun responses on Twitter. “Nice try old man. You like Capt. Beefhart cuz he was a maniac who imprisoned his band, treating them like serfs,” said one Huntsman follower. “So your plan for relevance is to EMBRACE quirky/weird? Is that an admission credentials/brains don’t matter in today’s GOP,” said another.

Obama's internet team is still canvassing which bands he should like. And once he declares, he will waffle a week later. "Americans still believe in an America where anything's possible. For instance, three months without a Neil Young release. Or a Dillards reunion." There's some effing change to believe in.

And like Huntsman, Ms Hilton believes in climate change. At a symposium of Euro-trash trust fund douchebags in Prague she often said, "That's hot."

Now we all know they come in 3's. Who could be next? Just wondering.

Trout Mask may be Don Van V.'s masterpiece, but Safe as Milk and Strictly Personal are the only albums I actually listen to. Trout Mask is one of those works of art that it's easier to admire than enjoy.

personally, i'll take Lick My Decals Off Baby over TMR anyday. But hell, lots of Beefheart out there to enjoy.

as a young hipster in the early 80's I dug the Captain. Then I heard Howlin' Wolf and well, forget it, wholesale thievery....

Ice Cream for Crow is still my favorite Capt. record. Weird I know.

There's a new single from Tom Waits out that sounds pretty much exactly like a Beefheart rant.

True, the Captain started out imitating Howlin' Wolf. But everyone starts out as imitators of somebody. He definitely took it to his own place-- a place where Wolf, Coltrane, and Bartok were in the house band. Hunt the "Detroit Tubeworks" appearance down on YouTube-- nobody else's ensemble ever sounded like that, so tight yet almost falling apart, so separate yet together. No overdubs there. And (in a very different yet similar way), no song from the 70s rocks harder than "Big Eyed Beans from Venus". A difficult man, hit or miss, but when he hit the whole universe shook.

I stumbled across you with keywords 'death sells'. I wrote a posting on Tuesday which absolutely died. Kinda fitting but hellishly frustrating.

Anyway - just wanted to say hi. I enjoyed my visit. :)