In all seriousness, our younger readers may not believe this, but there really WAS a Dutch invasion of the American pop charts in the late 60s.

No kidding -- an indie record label called Colossus, run by a guy named Jerry Ross, who seems to have been one of the more colorful music biz hustlers of the period -- signed up a bunch of Dutch artists and actually scored a bunch of hits.

The most famous being -- still -- "Venus" by Shocking Blue. Deservedly.

This one, however, has irked me for decades now. 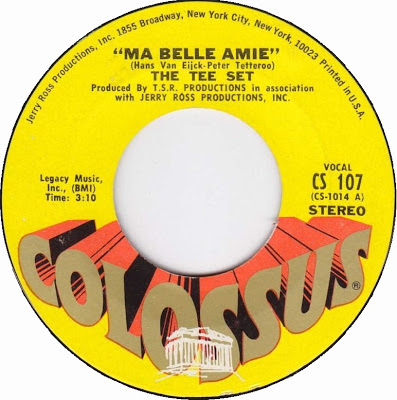 Let me stipulate up front that this is a very nicely produced record, and that the singer is not a bad simulacrum of certain Brit blues pop-rockers of the period.

Let me also stipulate up front that the song makes me want to shove pointed burnt sticks up my nose. Or the singer's nose, I'm not sure which.

Fun fact: The hippie chicks at my old school used to sing along to it as "Ralph Bellamy."

Mouth and Macneal were dutch, too. Both songs are of the same vibe but this is a masterpiece compared the aforementioned duo's hit.

I was gonna post Mouth and Macneal tomorrow, but having just watched the video, I simply can't inflict it on anybody else.
:-)

I haven't heard this since I was twelve. It has some "Beatlesque" touches, a "Paul" harmony line here, the phrasing at the end of the chorus "I'm in love with you" there, the offbeat organ chords, etc. When this came on the radio, I liked it.

You're right; it's not a bad little record, actually. I was just being snarky....

I agree as well, I liked the song too, being 13 at the time. Still could kind of stand it.

Funny how many people got the title to a zillion songs funnily wrong.

A much, much better song than "Ma Belle Amie".

Give it props! Do not fear it's greatness! Embrace it.

When I was a kid, I was sure that was McCartney singing on the bridge. A dead ringer, no pun intended. Don't mind this when it comes on the radio, but then I groove to Ride Captain Ride every time too, so I'm obviously not well.

My sister bought the 45 single. The "B" side was "Angels coming in the holy night". Completely different. Not necessarily good, but not bland pap either.