Passion is No Ordinary Word

Attention world -- I will no longer brook any criticism of filmmaker Judd Apatow.

Why? He just facilitated the reunion and comeback of Graham Parker and the Rumour. One of the most exciting groups that ever wore shoe leather.

I haven't seen Apatow's new movie yet, but trust me -- the the new Rumour album is transplendent. 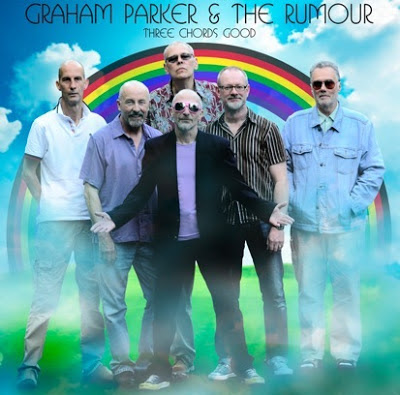 Also -- if you don't already own it, get thee over to Amazon immediately and download their masterpiece Squeezing Out Sparks, which should be on anybody's short list of the best rock records ever made.

And a big shout out to drummer Steve Goulding (who you might know from his work with the Mekons over the years). I toiled with Steve for about a year at a certain music website whose name I will not mention at this point, given that they employ lawyers.

But he's a great guy and a great musician, and I couldn't be happier that he's now in a Hollywood movie.
Posted by steve simels at 8:44 AM

Graham Parker, always one of my faves. Saw him a couple of times Live back in his heyday. He never disappointed. His new CD is pretty good. As for Judd Apatow's movies, I think I'll pass.

SUPERBAD is the AMERICAN GRAFITTI of its generation. A great movie -- seriously.

Goulding is indeed a great guy. And a better drummer.

I saw three shows of the current tour, and the man plain delivers. . . .

Steve, thanks for posting this. LOVE Squeezing Out Sparks to this day. As an 'experienced' musician myself, it's good to see some old geezers make some great music again.

By the way, I hope you don't mind, but I recently referenced one of your articles on Fountains of Wayne on my own blog, Kool Kovers. Please have a look when you get a minute. Thanks!
http://koolkovers.blogspot.com/2012/12/the-story-in-your-eyes.html

Seeing GP & Rumor tonight in Chicago and cannot wait. Loved his solo work as much. My favorite solo song/album Big Man on Paper from Human Soul.

Phillydog -- going over there to check it out now. Thanks for the headsup.

3 shows! Cool! I saw one and they were great. I got the Rumour to autograph the new lp cover. All nice guys. Looking forward to the GP documentary that I kicked some $ into. Graham is way under-rated and overlooked. I am thrilled he's getting some recognition lately.

I don't want to toot my own horn unnecessarily, but my first wife did the art direction for the Rumour's "Purity of Essence" album, and I contributed jokes to the front and back cover.

This new albulm is the best news I have heard in a long time. Now can we hope for a tour - GP used to put on a great live show.

(There are rumors (no u! - just like on the first run of cds of Three Chords Good) of reissues of the early albums next year. "Stick to Me" is out-of-print!)

Tour done - what a bummer. Just looked on-line. Did hit my old stomping ground in Newton NJ. But major misses in the midwest - as usual for anyone worth seeing. The word of this releae should have gotten out before now. On to Amazon...