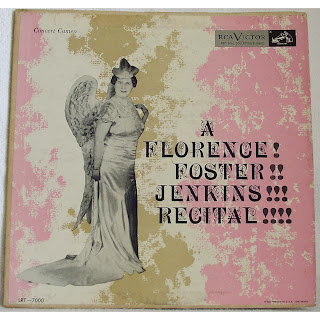 If you don't know Florence...


In her time, Florence Foster Jenkins was a novelty in the history of music, an operatic coloratura who had all of the requisite charms and trappings worthy of a diva, minus the voice. Married to a wealthy industrialist and well entrenched in upper-crust New York society by 1912, "Madame" Jenkins obtained a divorce that year. The resulting settlement was handsome enough to set Jenkins up in style and to pursue her extensive charitable interests. She had already been studying voice for some time, and her charity fundraisers included such gala events as "The Ball of the Silver Skylarks," involving special costumes made at her request, and usually culminating in a sample of her singing. Jenkins' voice was high, scrawny, and seemed to have a mind of its own, warbling its way through difficult coloratura arias with the grace and control of an upright piano pushed down a spiral staircase. Well-heeled society types would attend Jenkins' recitals and patiently endure her auditory assault, along with enjoying a well-concealed chuckle or two at her expense. Jenkins' annual gala would remain a popular fixture in New York society for decades.

I also love the fact that her accompanist/Svengali was named Cosme McMoon. I'll betcha he was a lot of fun at parties, if you know what I mean.
Posted by steve simels at 10:37 AM

I wonder if she was part of the inspiration for the character Susan Alexander Kane in Citizen Kane?

And, yes, it's quite excruciating.

I suspect she was. Because Hearst's real mistress actually had talent.

Sounds like those clucking chickens in 1930's cartoons. Pass the creamed chicken.

I would have loved to hear Groucho comment on this. She's certainly no Margaret Dumont.

I have always wondered about recordings like these if the musicians have any sense of whether they are in tune? This one is interesting, because she actually does seem to have a sense of pitch. But her "instrument" does not cooperate. She is fighting to get the pitch right in some cases (and outright missing by at least a half step in other cases). While it will not make the frequent play list, I refuse to pass judgement, because 1) I am afraid that I might sound like this at 76 when my voice gives out, and 2) in the spirit of Pete Seeger, I would rather have people singing badly than have no music in their hearts.

Mrs. Miller can't hold a candle to her.

Susan Alexander for sure.

This calls for a laryngectomy. Scalpel, please.